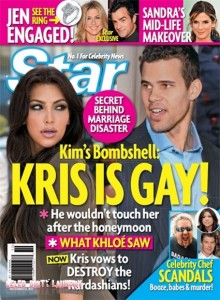 This Kardashian divorce is getting messier and messier by the day.

Star magazine is reporting that Kim believes Kris is gay because of what he wouldn’t do on their honeymoon. Get the details after the break.

Star magazine is claiming that the 72 day marriage disaster is because Kris refused to touch Kim on their honeymoon. They are also claiming that Kloe Kardashian had seen things that may only further prove his gayness. Kris is reportedly uber upset and humiliated over the whole divorce situation and is planning to destroy Kim and the dynasty she has built. 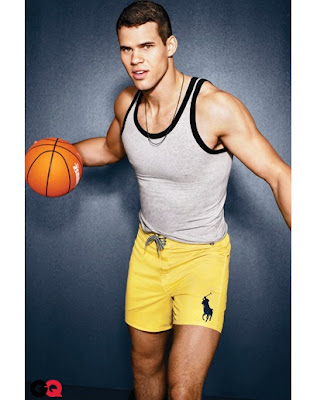 Kim Kardashian is a very attractive woman, but maybe Kris just wasn’t in the mood to be intimate with her on their honeymoon. And from watching the wedding special Khloe seems to have always had a beef with Kris, so it’s really no surprise that she would reportedly have evidence that Kris is gay.

Spotted @Oh No They Didn’t