Oprah Winfrey earlier claimed that Kim Kardashian’s trip to Haiti was just a show-off. Other witnesses also reported that she attended parties and was being mean to the local people. However, this realty show star has spoken up against all the reports saying that her trip to Haiti was not for show. 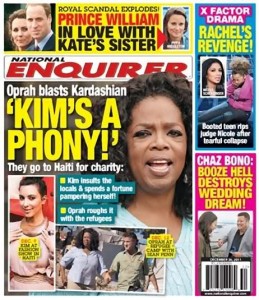 The claim of her Haiti trip being just a show came on National Enquirer.

Kim recently took to her website Â answering the reports published in the magazine.

Kim said, her mission in Haiti was to learn more about Bello actress from television show “Prime Suspect”, Marai’s charity.

She added, “We Advance, meet the Haitian people who have made such amazing progress since the devastating earthquake in 2010, and celebrate the women of Haiti, who inspired me more than I ever could have anticipated.”Â

She also claimed to have bought jewelry in the ravaged country that was devastated in a deadly earthquake last year. In this regard, Kim said that she was at the Haitian Artisan Fair where the amazing men and women sell their jewelry and crafts to make a living.

Just as a reminder, magazine Enquirer wrote that the local people called her as a “phony” and asked her to “go back home!” The article also added that Oprah was mad at her for the trip.