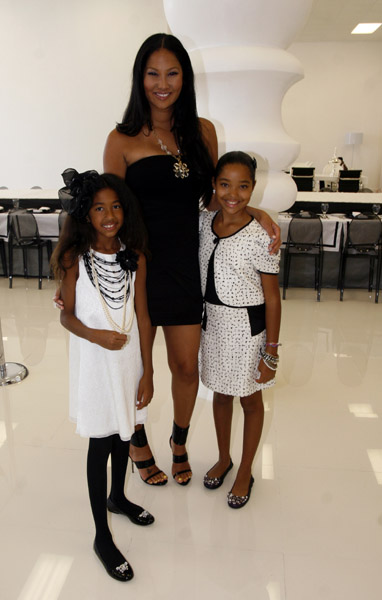 Yesterday we announced Kimora Lee Simmons is no longer nursing her 14 year-old Baby Phat and Phat Fashions yesterday… which we have found out to be a lie (August 25). Sources close to Kimora were talking about her recently, Â and it turns out that the over rated diva was “fired” and not just moving on as reported earlier. Check out the rest of the story and pix below! The Kellwood Company, which owns Baby Phat, apparently wanted clean house and this blindsided Kimora who never saw it coming. Word is that is was likely a cost-cutting move by the company as Kimora was over budget. In addition to overspending, people are complaining that she would pay herself and her children fees to appear in company ads (ummm….I think they deserved those fees. It’s called modeling!). But what’s funny is that insiders say a lot of the budget went to airbrushing Kimora, who is, according to this Daily News article, a size ten. Thousands were spent on superimposing her head on the bodies of much slimmer models. So much for “loving youself the way you are.”

So when we were all baffled by how super slim Kimora got right after having baby Kenzo, we were really looking at Becky, Sally and Jane airburshed with a Black and Asian hue.

Yesterday, Kimora, Aoki, and Ming Lee spread the love as Aoki Lee Simmons celebrated her birthday with little girls from the Make-A-Wish Foundation here are all the pics.

Normally, I wouldn’t post information like this, but Kimora was so freaking stank with me last time we met, I felt it was important to expose her. Next time don’t shyt on the photographer. You might need him one day, and I am all about coming up.