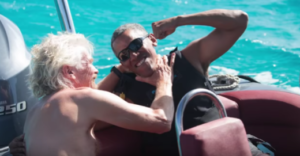 Barack Obama is living his best life. Since leaving the White House, we have seen the former president transition to full-on vacation mode.

Barack and Michelle Obama made a stop at the British Virgin Islands to visit billionaire Sir Richard Branson. We now know what Obama has been doing with his time off (aside from shocking the Twitter-verse by rocking a backwards baseball cap.) 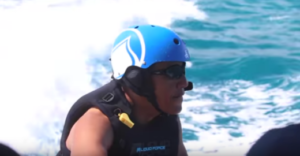 In a blog post, Branson gave us a glimpse of Obama’s new life. The former president told Branson that his security team didn’t allow him to surf during the eight years of his presidency (it was considered too dangerous).

Now that he’s free to take to the water again, Obama and Branson made a deal – if Obama could learn to kitesurf, Branson would learn to foilboard, and they’d have a competition to see who could stay up the longest.

In the end, Obama emerged as the surfing winner. “After all he has done for the world, I couldn’t begrudge him his well-deserved win,” Branson writes.