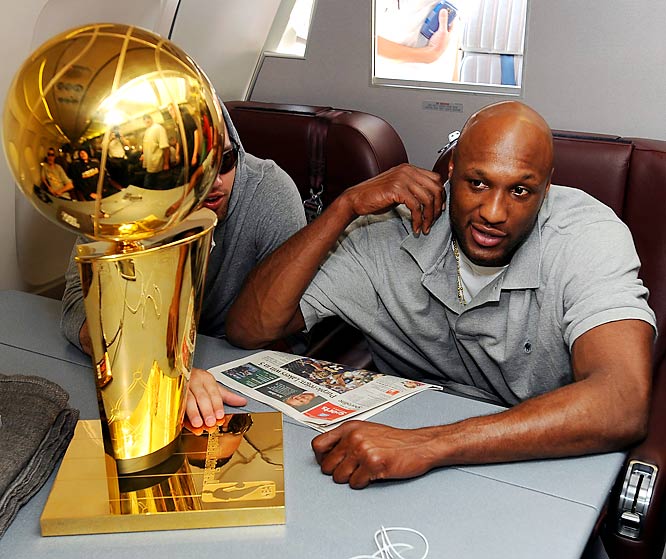 When you think of Lamar Odom the only things that come to mind are LA Lakers and being the Husband to hit reality star Khloe Kardashian. Months ago the happily married couple revealed they were coming gout with their own reality show Call “Klomar”. When I initailly got wind of that I thought nothing of it except it being a spin off from “Keeping Up With The Kardashians”. Recently it was revealed that some heartfel substance would be aired on the show involving Lamar and his past and how he dealt with continuous issues of his father being an addict majority of his life.

â€œOur relationship is completely different from the normal father/son relationship. My fatherâ€™s a heroin addict. I was six-years-old when my parents split up. I grew up with my mother and my grandmother. We lived in Queens in a rough neighborhood. I had my mother around until I was 12-years-old, she passed away. After that my father wasnâ€™t around.

“Iâ€™ve witnessed things that a 10-year-old definitely wasnâ€™t supposed to see. My father is somebody Iâ€™d do anything for, but yet I still wonâ€™t let get too close. Itâ€™s hard for me to really speak upon it and get through to Khloe because she grew up so different.â€

â€œBesides being embarrassed, it makes me a little uneasy.â€”Iâ€™m not asking him to be my father, Iâ€™m asking him to act like youâ€™re my father. Joe had demons, battles he had to overcome. He lost time. There are some people who lay down to take a nap at 2 they wake up at 5 in the afternoon. When Joe woke up 15, 16, 17 years had passed and I was already a grown man.â€

Although, he chooses to keep his father at a distance, Khloe reveals that Lamar still supports his father by making sure that his rent is paid. He also gives him a monthly allowance, however when she starts to press him about building a relationship, Lamar tells her â€œWhen it comes to Joe, just do me a favor, and do what I sayâ€œ.

For more exclusives from Lamar please tune into the New reality show that airs this Sunday April 10th, 2011