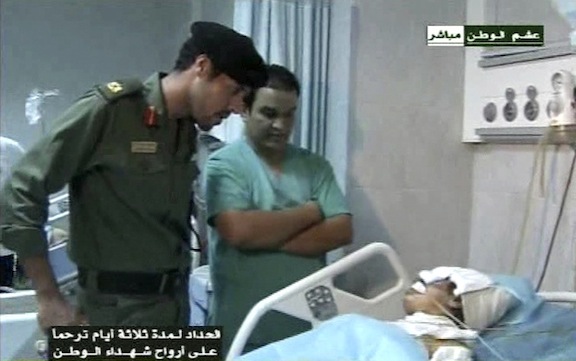 Contradictory reports suggest that Colonel Gadhafi may have been killedÂ or captured in Libya.Â Al Jazeera and Libyan state television are reporting that the Libyan dictator has been killed during a gunbattle in Sirte. A senior National Transitional Council official, Abdel Majid, told Reuters by telephoneÂ that Gaddafi has died of wounds suffered during his capture in Sirte. Reuters reportÂ that he was wounded in both legs as he “tried to flee in a convoy which NATO warplanes attacked.” 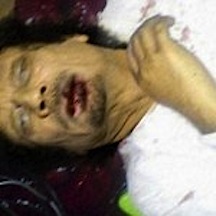 The Misrata Military Council, one of multiple command groups for revolutionary forces, says its fighters captured Gadhafi in Sirte. Another commander, Abdel-Basit Haroun, says Gadhafi was killed when an airstrike hit a convoy trying to flee.

Despite conflicting reports regarding whether Gadhafi has been killed or captured, in Tripoli, celebrations are already underway with gunfire and honking.

Secretary of State Hillary Rodham Clinton visitedÂ LibyaÂ on TuesdayÂ to offer a new aid package. She told students during a gathering in Tripoli, “We hope [Gaddafi] can be captured or killed soon so that you don’t have to fear him any longer.”

Gaddafi was ousted from power in August, and his whereabouts have been unknown for months. The Criminal Court in The Hague, Netherlands, accused Libya’s former ruler of crimes against humanity. He has ruled Libiya for Â 41 years.