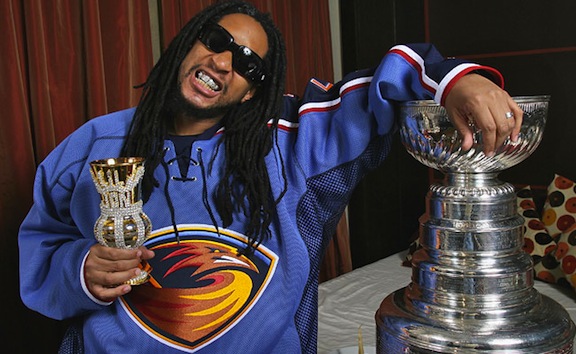 Hip-hop star Lil Jon may swoop in to save the future of professional hockey in Atlanta, Georgia. WXIA-TV says the famed beatmaker and Hollywood producer Jerry Bruckheimer are thinking about purchasing the Atlanta Thrashers in order to keep the team in town. The organization is struggling financially, and is said to be considering a move to Canada. Lil Jon has been a dedicated supporter of Atlanta hockey. He’s been a fan dating all the way back to the days of the Atlanta Flames. In 2006, Lil Jon was featured on the team’s website posing with the Stanley Cup trophy.

News of Lil Jon’s interest in buying the Atlanta Thrashers comes just a few days after he was sent to the reality TV penalty box. The rapper was eliminated on NBC’s “Celebrity Apprentice” last weekend, falling just one week short of the show’s finale.