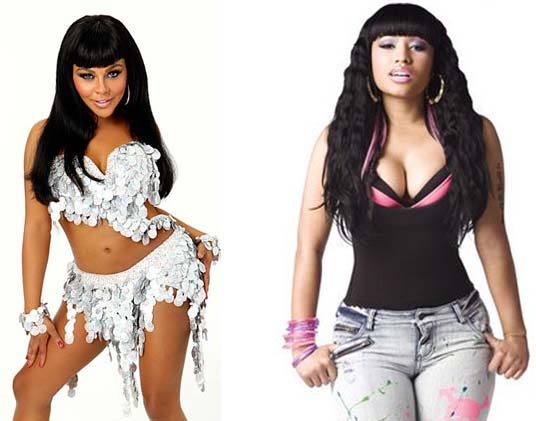 Our homie, NecoleBitchie reports that Lil Kim finally explains her beef with Nicki Minaj in an interview.

â€œFor the last year she has been subliminally taken shots at me. Subliminally taken shots at the other girls in the industry. I mean come on, we read that interview where she said â€œBeing that the other rap chicks in the game ainâ€™t got sh*t to do right now, when Iâ€™m by the pool they can feed me grapesâ€. I remember that sh*t, I keep my ears to the street at all the time. Just because I do my Hollywood thing and you know my Malibu Barbie thing donâ€™t mean my ear isnâ€™t to the streets at all time. The last thing she did that was very subliminal â€œDid I [inaudible] the Queen?â€ and Puffy sitting right next to her riding with that bullsh*t?â€ Come on! We ainâ€™t stupid.

Letâ€™s go all the way back when when she first came out and was doing all of my songs over. There was certain interviews that she was doing and my fans got upset because she was busting shots at me. Actually she was throwing pebbles. It was nothing. I was blowing them out my face like flies. She said some sh*t on twitter like â€œOh f*ck all you Lil Kim fans. Nicki Minaj is the sh*t right nowâ€. I still let that ride

So a little while goes by, I see her at the Lil Wayne concert and I show her love. She sitting here saying she showed me love, I showed her love. She reciprocated it but it was a little war on her behalf. A little obnoxious but whatever. Now from that time on right, I would go on the internet and see little pebbles thrown my way. Anybody thatâ€™s in the hip hop industry, we know how this game goes. We know the sh*t she was saying was subliminal, we know itâ€™s a competitive sport and little people are going to try to claim their spot.