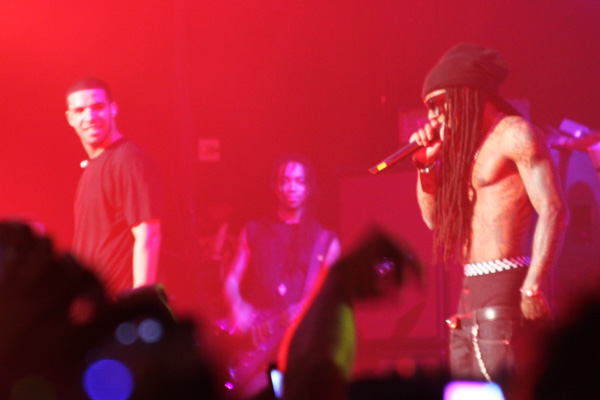 (11/8/2010) Lil Wayne hit the stage with Drake during the finale of Drakeâ€™s â€œLight Dreams and Nightmaresâ€ tour. This is the first time for Wayne to perform with Drake since his prison release from Rikers Island on Thursday. Drake joked throughout his set about the performance. He told groupies and fans about his first phone call with Lil Wayne since he Wayne left prison and asked fans to fill in the words for Wayneâ€™s verse in â€œRight Above it.â€ See videos and pictures after the jump Rapper Lil Wayne dressed in his usual black jeans, white sneakers, and shirtless took the stage while Drake was singing â€œMiss Me.â€ The crowd went crazy.

Wayne rapped, â€œI was gone ’til November, but I didn’t trip ’cause I know he was gonna get ’em,” Drake told MTV Newsâ€™ Sway that he was unaware of Wayneâ€™s appearance during his set. Drake continued on with the show while Wayne celebrated in the elevator on the way backstage. Wayne left before the show was over.

I am glad Wayne is back and I know you are!