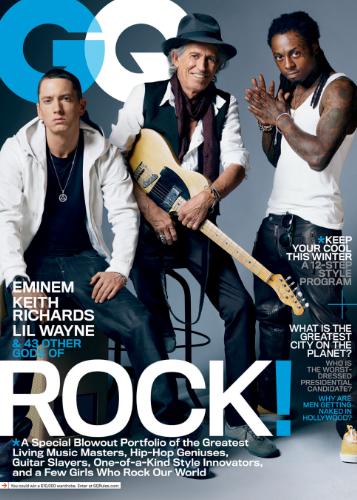 CEO of Young Money Record Lil Wayne joins hip hop tyrant Eminem on the cover of GQ for their November Issue. The two hip hop stars are alsoÂ joined by rockstar legend Keith Richards as Gods of Rock. Inside the magazine Wayne talks about how he really feels about his father and when he plans to retire from music. Check inside for an excerpt of the interview.

On why he will retire at 35
Basically, I have been doing this for eighteen years. Thatâ€™s reason number one. I have accomplished all that I have set out to accomplish and more. Also, I have a label, and Iâ€™ve only put out two artists [Drake and Nicki Minaj]. I have a lot more work to do, and itâ€™d be selfish to not focus on being the boss and focus on their projects.

But the main reason is my kids, my children. Now, if I thought Iâ€™d be selfish to my artists, imagine what I think I would be doing to my kids. I have enough money that they donâ€™t have to ever do anythingâ€”which, they will do everything, â€™cause they ainâ€™t getting sh*t. [cackles wildly] Six [more] years, I can do this Lil Wayne thing, and my boys will be about 7 and 8 years old. And man, itâ€™s all about them then. You know, whatever theyâ€™re doing. Sports. Whatever theyâ€™re into. Thatâ€™s where I am. Iâ€™m at every game. Iâ€™m the dad with the hat on. The jersey. Thatâ€™s me.

I feel like Iâ€™ll be a new me, and how good is that? To actually be opening a brand-new door of life at 35? Thatâ€™d be awesome. Totally awesome. Iâ€™m looking forward to it.

On his new hobby of skateboarding
I donâ€™t know. Iâ€™m still like a kid, because unfortunately my childhood was raped away from me because I became a star, a rapper, or whatever you want to call it, and you canâ€™t be a kid and a rapper at the same time. So I watch television and I get real amped. Like, people watch commercials, and theyâ€™re like, â€œWhoâ€™s gonna buy that?â€ Iâ€™m the person they make the commercials for. I watch them, and Iâ€™m like, â€œOh God, thatâ€™s awesome.â€ So I was just watching TV, and I was like, â€œYeah. I want to do that!â€ And I called a guy and I said, â€œI want a ramp on my roof.â€ I have a pretty big roof at home. So I put a ramp on the roof about five months ago, and man, Iâ€™ve been skating ever since.

On his relationship with his father
He donâ€™t give a sh*t about me. And I donâ€™t give a shit about him. I saw the n*gga recentlyâ€”I had a show in New Orleans. And I ainâ€™t afraid to put this out there, â€™cause this is just how much I donâ€™t give a f*ck about a n*gga, and I want people to see how youâ€™re not supposed to be. I was parked at the hotel, and I saw him walking outside the hotel. Just walking back and forth. Iâ€™m like, â€œLook at this n*gga! You gotta be looking for me.â€ If Lil Wayne got a show in New Orleans, the whole of New Orleans knows. Basically, youâ€™re not there for nothing else but me. So I call my man on the bus. Iâ€™m like, â€œN*gga, thatâ€™s my daddy.â€ So I tell my man, â€œGo see whatâ€™s up.â€ So my man goes to holla at him. He tells my man, â€œOh. I didnâ€™t know yâ€™all was here. Iâ€™m here waiting for this little ho to get off work from the hotel.â€ For real? Thatâ€™s when I was like, â€œTypical Dwayne Carter.â€ So thatâ€™s whatâ€™s up with me and my real father. I donâ€™t want to look like his ass, but I do.

Wayne’s father has always been a tough issue for the MC who said that he would rather be called “Wayne” and not Dewayne after his biological father. Wayne is definitely changing the negativity his father brought in his life by being an amazing father to his 4 children.
Pick up your copy of GQ soon.
Spotted @necolebitchie
October 20, 2011