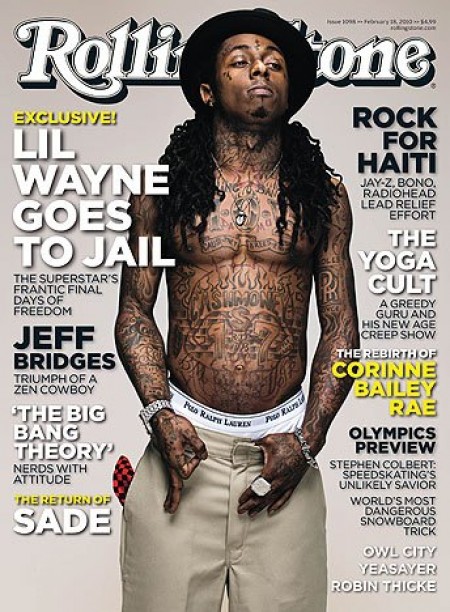 Lil Wayne is speaking out about his upcoming stay behind bars. Wayne will be sentenced to a year in prison next week, and he tells “Rolling Stone” magazine that he never expected to be locked up at this point in his career.He states, quote, “I didn’t know I was gonna be going to jail. This happened at the height of my career! Nobody knows the future.” Wayne pled guilty to felony gun possession last October after New York police found a gun on his tour bus in 2007. While Wayne isn’t the first person to face such a charge, the emcee says he isn’t looking for anyone’s advice. “Weezy” remarks, quote, “This is Lil Wayne going to jail. Nobody I can talk to can tell me what that’s like. I just say I’m looking forward to it.” He adds, quote, “I know it’s an experience that I need to have if God’s putting me through it.”

Make sure yall go pick the up the magazine… They are using some of my pictures… I cant wait to see it.. Lil Wayne’s entire interview can be read in the latest issue of “Rolling Stone” magazine, which is on news stands now. The rapper’s long-awaited record “Rebirth” was released on Tuesday.