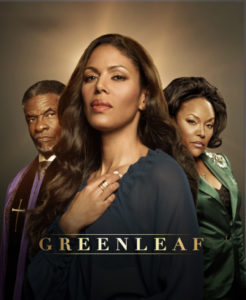 The OWN drama series “Greenleaf,” from award-winning writer/producer Craig Wright (“Lost,” “Six Feet Under,” “Brothers and Sisters”) and executive producers Oprah Winfrey and Clement Virgo (“The Book of Negroes”), takes viewers into the unscrupulous world of the Greenleaf family and their sprawling Memphis megachurch, where scandalous secrets and lies are as numerous as the faithful.

Nothing can break the #Greenleaf family bond. Get ready for season 2, this March. (? repost @the_kim_hawthorne)

“Greenleaf” centers on the journey of estranged daughter and disillusioned preacher Grace “Gigi” Greenleaf (Merle Dandridge, “The Night Shift”) who has returned home after 20 years on the occasion of the mysterious death of her sister, Faith. As she reenters the world of Calvary Fellowship World Ministries, the Memphis megachurch run by her powerful parents Bishop James Greenleaf (Keith David, “Community”) and Lady Mae Greenleaf (Golden Globe nominee and Emmy award-winner Lynn Whitfield, “The Josephine Baker Story”), it becomes evident that things are not as virtuous as they seem and that the family’s outward display of faith hides sin and misdeeds. Oprah Winfrey guest stars in a recurring role as Mavis McCready, the sister of Lady Mae Greenleaf and a close confidante to Grace Greenleaf.

Can you ever earn our trust back, Noah?

“Greenleaf” is produced for OWN by Lionsgate in association with Harpo Films and Pine City.

Congrats to @MsLynnWhitfield on her #NAACPImageAward nomination for Outstanding Supporting Actress in a Drama Series. Who is excited to see more of Lady Mae in season 2?

Lionsgate & Netflix have closed a worldwide SVOD deal for the OWN hit series Greenleaf. The deal will give Netflix the premiere in all territories ex-US & Canada day after broadcast and shortly after its linear run in US/CA. Season One will premiere globally on Netflix March 3. Greenleaf’s second season will debut on OWN on March 15th, 2017. Production is currently underway in Atlanta. Produced for OWN by Lionsgate in association with Harpo Films and Pine City, Greenleaf premiered last June as the #1 series debut in OWN history and was 2016’s #1 new cable series for women, averaging over three million viewers in Live+3 in its first season. (Source: The Nielsen Company)

#Greenleaf season 2 will be here before you can say Amen! Hear how legendary gospel singer Shirley Caeser made the theme song come alive, tonight on #WhereAreTheyNow? at 10/9c.