LisaRayeâ€™s New “All White” Jean Line Made for Thick Women 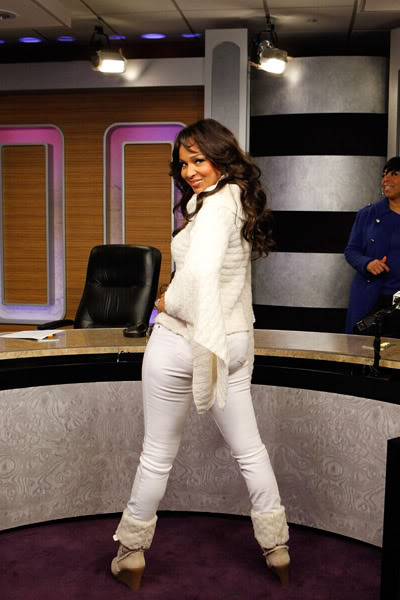 During a press conferece for the upcoming season of “LisaRaye: The Real McCoy,” the actress announced that she’s branding her own denim collection with PZI Jeans. Â Unlike many other celebrities, she’s not just slapping her name on a ready-made product, she’s getting hands-on experience in the design process. She Â had input on everything from material to garment structure and design.

The self-titled LisaRaye Collection from PZI will feature jeans that sheâ€™d wear any given day.

â€œI believe in this jean line,â€ LisaRaye said excitedly. â€œIt contours the body and holds us in. It has stretch to it. Iâ€™ve designed some really pretty designs.â€

LisaRaye crafted the jeans with curvier women in mind, so her pants are smaller in the waist and fuller in the hips to flatter thicker figures. Women who want to rock LisaRaye’s jeans will be going for a very distinct look. It should come as no surprise to anyone who has seen “The Real McCoy” that all of her designs, no matter what the cut, are white.Â Sheâ€™s a real hustler, working on her jeans and also working on her reality show, â€œLisaRaye: The Real McCoy.â€ Season two.

Lisa was in Atlanta where she stopped by the “Steve Harvey Morning Show” to announce that season 2 of her show starts on April 7 on TV One. She posed with Carla Ferrell, Steve Harvey, Shirley Strawberry and Thomas Miles. I have to say I really don’t know how I feel about a all white jean line, if seems like the jeans will always get dirty fast…. What yall think?