“Live! With Kelly and Michael” Brings In Major Ratings On ABC 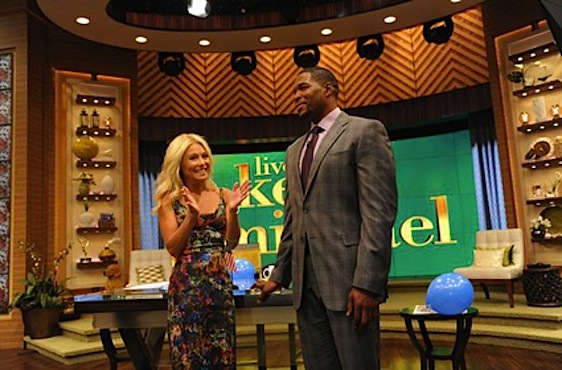 Michael Strahan‘s co-host debut provided a huge ratings bump for the newly named “Live! With Kelly and Michael” on Tuesday. Â CitingÂ the Nielsen ratings, ABC said its syndicated morning show saw a 44 percent boost in viewership from a year ago.Â  The network said the episode, which unveiled the former the New York Giants player as Kelly Ripa’s new co-host, was also the most-watched daytime program in 14 of the 15 TV markets.Â  ABC tapped Strahan to replace Regis Philbin as the show’s permanent co-host.Â  Philbin left the show in 2011 after 28 years, leaving a vacant seat that saw numerous temporary guests until Strahan was formally announced as Philbin’s replacement on Tuesday.

I have been watching the show my whole life, and have to say I was kinda scared that it would be canceled after hearing Regis was leaving, but after watching these past few months I see everything will be O.K.. Â The new host Michael is a perfect blind of Regis only he’s big as hell.

Strahan played with the Giants for 15 years and helped the team to a Super Bowl victory in 2008.Â  He is expected to continue his work as on-air commentator for “Fox NFL Sunday” in addition to his role on “Live!” Good Job ABC this is a win… I know I will be watching!!! Make sure yall support the show.