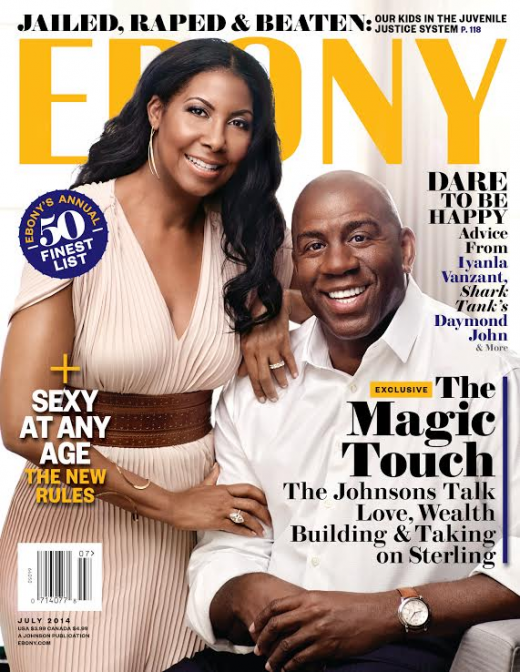 Magic and Cookie Johnson covers the July 2014 issue of Ebony Magazine and they are going to discuss Donald Sterling, their business endeavors, and keeping love alive after being married for many years.

Magic and Cookie Johnson showcase the beauty of black love on the July 2014 cover of EBONY magazine. The happy couple shares their thoughts about old massa Donald Sterling (owner of the NBA’s Los Angeles Clippers) who had words for black people and for Magic Johnson specifically. Magic told Ebony,

“I’m glad that I was able to stand up for our people and be the voice,” said Magic regarding the situation.

In addition to sharing their thought about the racist comments made by Sterling the happy couple shares how they have kept their love alive after being together 36 years. The two dated for 14 years before getting married and now they are celebrating 22 years of marriage. Cookie tells Ebony,

“We had our ups and downs,” admitted Cookie.  “We had a period where we were about to separate.  There was a point where I was home all the time; he was working,” she continued.  “Sometimes you start growing apart a little because he’s seeing new adventurous stuff.  He’s out in the world.  He’s growing.  [But] I’m stagnant.”

Magic shares that change was one of the things he learned most about being in a happy relationship,

“If I had kept going [that way] and the kids left, we would probably be divorced,” says Magic.  “Now we’re so connected to each other, but it took that situation to bring us back.”  He also added, “I’ve always told Cookie, ‘The only thing I wanted was to grow old with you.’ [Now] we just look at each other and say how blessed we are.”

Cookie has taken a lead from her husband’s business savvy and now shares in the dreams of entrepreneurship. Magic says he loves to see his wife making big moves. He tells Ebony,

“It’s so sexy,” he says with a wink.  “It is beautiful to see her become this brand; this CEO.”

It is so nice to see black love in full effect and reading through the interview it makes one excited to see that love can last through the good, bad, and ugly. Holly Robinson Peete calls the Cookie and Magic a real power couple. She tells Ebony,

“And yet you still see how in love they are.  With grace, forgiveness and love, they represent everything that is real and authentic about Black love.”

The Johnsons are truly inspiring they weathered the storms of life that included Magic Johnson being diagnosed with HIV in 1991. With Cookie’s love and support Magic was able to get over the hump and become an advocate of HIV/AIDS prevention and research. He tearfully tells Ebony,

“In my quiet moments is when I cry inside to say, ‘Thank you, God, that I’m here to see my kids, play with my grandkids.”

The article continues to discuss the Johnson’s sense of fashion, their children, and being empty-nesters.

Be sure to check out the behind the scene photos here.

The July issue of EBONY will be on newsstands June 10.