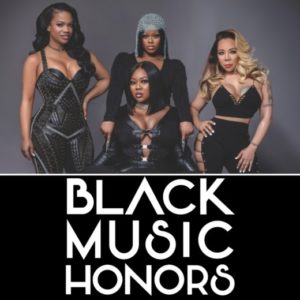 Xscape fans rejoice! Thanks to a surprise request from Mama Joyce, Kandi Burruss-Tucker’s mother, the members of legendary R&B girl group Xscape are planning to record a brand new album…together!

While accepting their award, Tamika Scott invited the group members’ mothers onstage. When Mama Joyce stepped up to the microphone, she expressed that her “one wish” was that the ladies would record one more album! It has been widely reported that the ladies were visibly shocked at the surprising announcement!

However, Mama Joyce was simply echoing the cries of many of the platinum-selling group’s fans around the world who have been desperate for new music from the group for years. Despite the sudden announcement, the “Just Kickin’ It” performers have agreed to finally work on their fourth album of new music together just 21 years after the release of their album “Traces of My Lipstick.” The Black Music Honors award show will begin airing in syndication at the end of this month. Be sure to check out the website to see what channel the show will be on in your area. BounceTV will broadcast the ceremony on October 20 at 12:00 PM Eastern.

Are you excited about Xscape’s upcoming album? Do you think they should remake or remix any of their classic hits? Share your thoughts in the comments below!