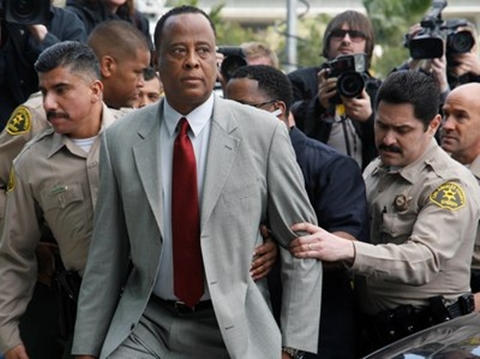 Michael Jackson isn’t the first patient that Conrad Murray has been accused of killing. According to TMZ.com, detectives with the Los Angeles Police Department interviewed a man named Gerard White after the King of Pop’s passing. White alleges that Murray is to blame for his father’s death six days after undergoing heart surgery in Las Vegas back in 2007. White reportedly told investigators that Murray ripped a hole in his father’s heart during the operation, and was unable to tell that his dad had been fatally injured. White adds that he approached lawyers about a possible lawsuit, but claims no attorney wanted to take the case because there wasn’t enough money to be made.
A rep for Conrad Murray tells TMZ that White’s allegations are “hearsay and totally unsubstantiated,” noting that Murray had medical insurance so there was definitely money to be made from a lawsuit. The rep adds, quote, “The fact that White couldn’t find a lawyer to take the case tells me White’s claims most likely had no merit.” Conrad Murray was Michael Jackson’s doctor when the singer died from cardiac arrest on June 25th, 2009. Lethal levels of propofol were eventually found in Jackson’s system, and Murray subsequently admitted to providing the drug. Murray’s trial on an involuntary manslaughter charge begins March 24th.