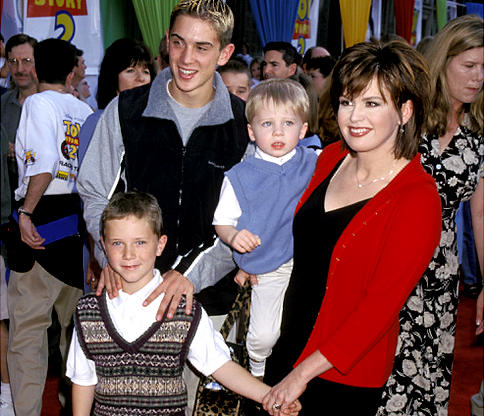 Freddyo.com learned over the weekend that Marie Osmond’s son Michael Blosil leapt to his death Friday night in Los Angeles. Contacted by phone this morning, Donny Osmond told us: “Please pray for my sister and her family.”

Here are the details: Michael, who was 18 is one of Marie’s eight children he was adopted, died after jumping from his downtown Los Angeles apartment at about 9 p.m. on Friday night.. He left a note explaining he intended to commit suicide due to his life-long battle with severe depression that left him, he said, feeling as if he had no friends and could never fit in.

“My family and I are devastated and in deep shock by the tragic loss of our dear Michael and ask that everyone respect our privacy during this difficult time,” Marie, who helped her son fight depression throughout his life, tells ET.
Donny and Marie’s Las Vegas show has been cancelled. My Prayers are with her family…

Before Marie Osmond’s 18-year-old son leaped to his death, he texted a friend to tell her there was a note waiting for her in his apartment, TMZ.com reports.

Michael Blosil and the unidentified woman were supposed to get together Friday night, sources told TMZ, and she received his text shortly before 9 p.m.

The woman, who lives in Blosil’s Los Angeles apartment building, then walked over to his flat. His roommates let her in.

Minutes after she found the note, they heard the sound of sirens outside the window, TMZ reported. The note said that the woman was his only close friend in L.A. and that he was depressed.

While the note did not mention suicide specifically, it did list things he would be doing for the last time, the Web site said.

Blosil’s roommates were unaware of what was going on, but they became alarmed after the woman read the note. They then heard sirens and saw emergency vehicles on the street below and realized what had happened.

A 911 call about Blosil’s death jump from his apartment building was made at 9:26 p.m., RadarOnline.com reported.

An autopsy may be performed as early as Sunday, according to TV’s “Entertainment Tonight.”

Osmond said her family is overwhelmed with grief by the “tragic loss” of her son, according to a statement released by her publicist.

“My family and I are devastated and in deep shock by the tragic loss of our dear Michael and ask that everyone respect our privacy during this difficult time,” Osmond said in a statement.

Marie and Michael’s father, Brian, divorced in 2007. They have two biological children and adopted five others, including Michael. Marie also had a son with her first husband, Stephen Craig.

Osmond was to perform with brother Donny last night in Las Vegas, but the show was canceled.

When reached Saturday, Donny Osmond told “ET,” “Please pray for my sister and her family.”