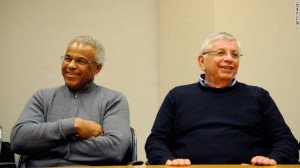 Were Playing Bas-ket-ball We love that Bas-ket-ball!!!!! Everybody sing! The fact that the glass is now looking 1/2 full instead of 1/2 empty is GREAT as the NBA Players and Owners seemed to have reached a tentative agreement according to CNN. Â Training Camp could start as early as Dec 9th and there could be a Christmas Day game. I know what photos I will be taking on Christmas. I bet win or loose the first game, both teams will walk to the locker rooms smiling.

A previous lockout in the NBA lasted 204 days, from July 1998 to January 1999, before a new Â bargaining agreement was reached by both sides. Mannnnnnnn! I’m glad this lockout well let’s just cross our fingers and hope the negotiating time doesn’t take as long as the lock out. According to CNN “President Obama is slated to host the “First Ever Obama Classic” on December 12, a fundraiser featuring current and former NBA players. Some big names have already signed up, including Boston Celtics’ guard Ray Allen and New York Knicks’ forward Carmelo Anthony.” end of quote. To read the entire article click the link: http://www.cnn.com/2011/11/26/sport/nba-deal/?hpt=hp_t1