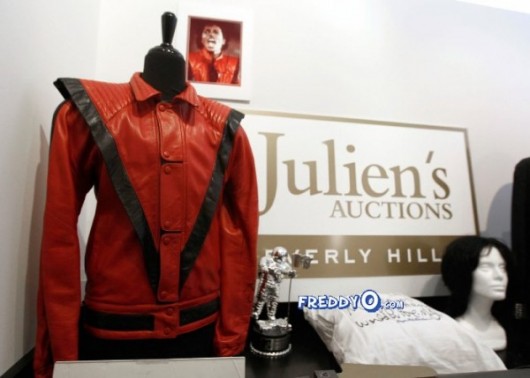 Michael Jackson provided the folks at Julien’s Auctions in Beverly Hills with a rather large “thrill” over the weekend. The red and black leather jacket the King of Pop wore in his iconic “Thriller” video sold for one-point-eight-million-dollars on Sunday. It had been estimated that the jacket would bring in at least 200-thousand-dollars. Texas resident Milton Verret placed the winning bid, and plans on displaying the jacket at Austin’s Dell Children’s Hospital. Inspired by the late pop icon, Verret says he plans to use his expensive piece of memorabilia to raise money for children’s charities and hospitals across the globe. A portion of the one-point-eight-million-dollars Verret spent will also benefit the Shambala Preserve, which has been home to Jackson’s two Bengal tigers since 2006.

Michael Jackson’s “Thriller” jacket sold just one day after the two-year anniversary of his death. The singer died from cardiac arrest on June 25th, 2009. It was later discovered that he had lethal levels of the drug propofol in his system. Jackson’s doctor at the time, Conrad Murray, has admitted to providing the drug, but denies being responsible for Jackson’s death. Murray has since been charged with involuntary manslaughter. His trial will begin on September 8th.