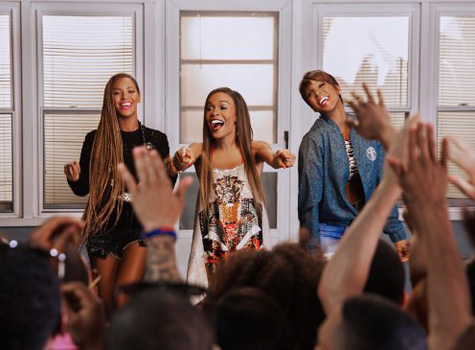 The lovely Michelle Williams announced that she has joined forces with Beyonce and Kelly Rowland to create a Destiny’s Child song on her latest project. Does this mean the girls could be coming back together to make some more GIRL POWER MAGIC?
Check out the details below.

Michelle Williams is coming back with some new music and she has a hot track featuring her former band mates Beyonce and Kelly Rowland. The track entitled  “Say Yes” is a gospel song. We know Michelle is a magnificent gospel singer. The sanctified singer told  “The Hollywood Reporter” that both ladies fell in love with her version of the Nigerian folk tune, and approached her about recording a remix of it. She reveals that the three reunited to shoot a music video to go along with it, saying the three felt like “little kids again” on the set. It’s unclear when the official version of “Say Yes” will arrive.

Michelle’s new album “Journey To Freedom” is due out in September. She says while some fans have been skeptical about her transition to gospel, her goal remains to “inspire,” “encourage and give hope.”

Check it out below:

Omeretta the Great,has created a bit of uproar with her "Sorry Not Sorry" record, watch video suggests that if you don't live in Fulton County...
Read more
Artist Spotlight