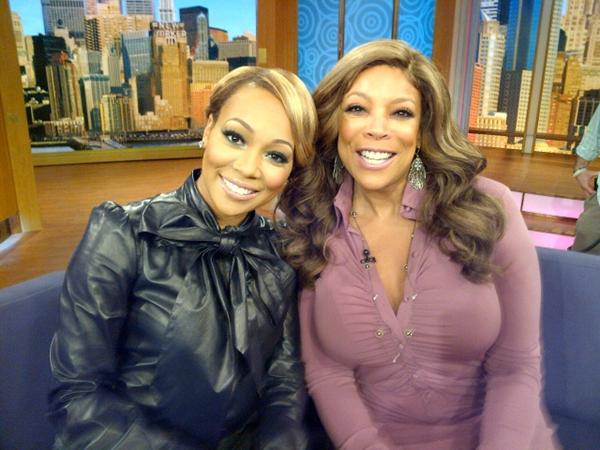 Earlier today, my girl Monica was seen on the Wendy Williams show and had a lot to talk about. Of the most important in the interview, she discussed all the pregnancy rumors that have been circulating. I’ve been seeing a lot of people speculating on whether or not she is so it was great to see her finally answer questions about that. In addition to that, she spoke about how she met her hubby Shannon Brown and why theyb decided to get married by the Justice ofÂ TheÂ Peace rather than havingÂ a wedding first. Read inside to find out all of the answers and a clip of her interview on Wendy Williams.Â Â

On How She Met Shannon
For me, Iâ€™m very spiritual and I believe we have our own plans and God has another. So I decided it would just be me and my kids. But remember me explaining to you â€œIâ€™ll just be by myselfâ€? Sometime , I think I see a little too much because of what I do. I see what the men do when the wives are at home; the whole nine yards. So I was like â€œIâ€™ll be alone; works for me! I already have kids.â€ I go to work one day and we weâ€™re shooting the â€œLove All Over Me,â€ which was right after I left here. I was here promoting â€œEverything To Meâ€ and â€œLove All Over Meâ€ was the next single. I go into the video shoot and he walks in, of course, heâ€™s so easy on the eye but even after that it was the way he treated other people. Â Iâ€™m a southern girl and I like southern hospitality; I like for people to be a certain way and I donâ€™t like egos. So the fact that he was speaking and he was talking to camera men, he was walking around, he was doing his own thing and [he was also] very relaxed. Then he started talkingâ€¦

We met on the video and I always say we had one long date thatâ€™s gone on for almost two years now because weâ€™ve been married a year as of last week. We dated about six and half months before we married.

On being married secretly
Actually, we did it Justice of the Peace style. It wasnâ€™t so much that it was a secret; we just didnâ€™t make an announcement, which is the new way for everything.

On if her family and friends were upset
They all knew; they helped us prepare because we had to bring the Justice of the Peace to our house. We promised; I am my motherâ€™s first born; he is his motherâ€™s first born and then our mothers are very close, so there was an unspoken â€œSo when are we all celebrating?â€ type of thing going on. So we just decided that after the season they were fighting to get a 3-peat [we would get married because] we didnâ€™t want to cause distractions during the season. That was really the real reason. I said, â€œOkay, weâ€™ll make a date.â€ Shannon picked July 9th and that is when we did the actual ceremony.

On if sheâ€™s pregnant
No, Iâ€™m not. This is the thing though, I donâ€™t even know where that came from and we would love to be and we practice regularly. So itâ€™s not a big deal.

On raising a blended family
My stepdad is amazing! My spirituality comes from him. Heâ€™s a minister and he was there for me when things were really rough, so I knew that a blended family would only be difficult if we made it difficult and so we didnâ€™t. There are all mature adults involved, which is a rare situation.

On her upcoming album â€œNew lifeâ€
For me, â€œNew Lifeâ€ the title basically says that if you allow God to bless you, he will. Sometimes we block out our own blessing holding onto things that are not just for us. I had to learn to embrace my new life and thatâ€™s what the album is about. I talk about my past, which by any means I am in no way ashamed of and do not feel convicted about. All the things that happened in my life helped me to get to the point where Iâ€™m at.

What do you think of her interview with Wendy?Â Where you surprised by any of her answers?