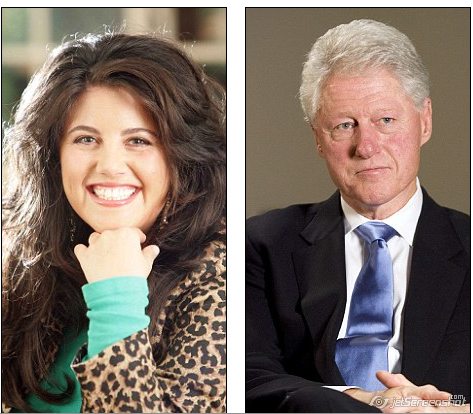 According to The National Enquirer, Monica Lewinsky is still soft on Uncle Bill. Wow really? After 15 years, she is still in love with the man she had an affair with while President Clinton was in office. An affair that almost terminated both of their careers. But hey I guess it was worth it. Maybe uncle ben was packing and once she got a dosage she was hooked. Left her feing for it. If you ask me I think she misses not being able to use her KNEE PADS for the most powerful man in the world at that time.LOL

“Monica still hasnâ€™t got over Bill and would take him back in a second. She told me: ‘There will never be another man in my life that could make me as happy as he did.’ Monica still carries a torch for him. Sheâ€™s dated some guys, off and on, since the whole White House mess. But sheâ€™s never been able to get Bill out of her heart.”

Really Monica? It’s time to let that go BayBaay! There is no point in lingering onto feeling that will only get you heartbroken. Bill has moved on beacuse he has realized what the important things in his life are and clearly you fit nowhere in that equation. #WastingUrTime