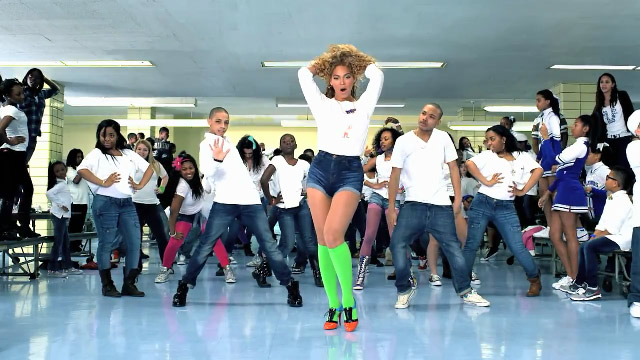 A few weeks ago we told you guys BeyoncÃ© teamed up with First Lady Michelle Obama-led campaign to tackle childhood obesity by releasing a video for the song ‘Move Your Body’.

The video sees BeyoncÃ© join a canteen full of school children before whipping up a dance frenzy alongside the enthusiastic kids.

Speaking about her part in the campaign, BeyoncÃ© said:

“I am excited to be part of this effort that addresses a public health crisis. First Lady Michelle Obama deserves credit for tackling this issue directly, and I applaud the NAB Education Foundation for trying to make a positive difference in the lives of our schoolchildren.”

BeyoncÃ©’s soon to be released fourth album surfaced online recently, entitled ‘Run The World (Girls)’. Her new album is rumored to be “groundbreaking”, and definitely on another level then ever expected. All of her songs and videos are going to be one of it’s kind and will definitely take the music industry to another level by mixing all the genres of music she loves, combining them and making them her own.

I was rumored that this upcoming album will be the last one for a while a few years as it is plain and clear that Beyonce wants to focus more on her family. Which makes sense because Beyonce will be 30 this year and hubby Jay is 42 already both having no kids.