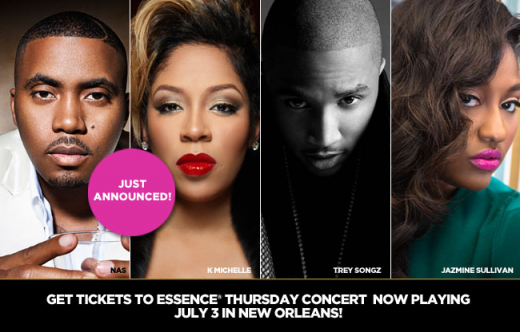 Rapper Nas is lending his celebrity to help kick off the 20th anniversary of the Essence Festival in New Orleans with singers K Michelle, Trey Songz, and Jazmine Sullivan.

Nas will help kick off this year’s 20th anniversary edition of the Essence Festival. The hip-hop veteran will take the stage at tonight’s “Now Playing” concert at the Louisiana Superdome in New Orleans. He will likely perform songs from his debut album “Illmatic,” which also recently celebrated its 20th anniversary. Can you believe “Illmatic” is twenty years old? It seems like yesterday I was listening to that album during PE. Guess we getting old.

Joining Nas on stage will be K. Michelle, Trey Songz and Jazmine Sullivan. Tonight’s concert will lead into the festival’s weekend concerts. The festivities will be divided into performances on a main stage and the more intimate Superlounge. Among the main stage performers are Prince, Mary J. Blige, The Roots, Lionel Richie, Tamar Braxton and more. August Alsina, Estelle, Eve and Naughty By Nature are just some of the performers on the bill at the Superlounge.

For ticket information and the full lineups check out www.Essence.com.

[youtube https://www.youtube.com/watch?v=xnS2tbgcTc0] One of My favorite artist  Summer Walker  was recently on NPR Music "Tiny Desk Concert" .. I had to show some love and...
Read more
Artist Collaboration

The Jasmine Brand reports that while Oprah Winfrey’s best friend journalist Gayle King said Russell Simmons did not pressure her to step back from...
Read more