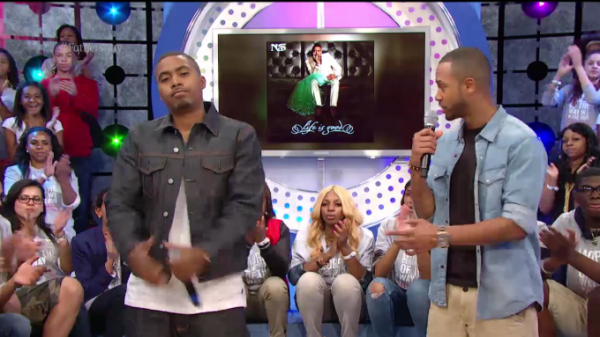 NasÂ stopped by 106 & ParkÂ yesterday to promote his new albumÂ Â Life Is GoodÂ which hits stores July 17 disc. Â While he was there he also performed his hit single “Daughters.” Â Check out his performance below.

Of course this performance was right in time for Father’s Day. Â Nas single “Daughters” tackles his relationship with his daughterÂ Destiny and while on the shew he also revealed why he participated inÂ Ice T’sÂ documentaryÂ Something from Nothing: The Art of Rap.

When Terrrance J asked Nas why he posed withÂ Kelisâ€™Â green wedding dress for his Life Is Good album cover, heÂ said,Â â€œThis right here shows the ending of one chapter, but whatâ€™s the next chapter gonna be?Â  Life is good regardless. You gotta keep your head up and keep it moving.â€