Our home girl NeNe Leakes is rich so we are sure she’s not concerned about the cancellation of her NBC sitcom “The New Normal”.

It’s hard out there for TV sitcoms. NBC has fired some favorite sitcoms guess it’s a sign of the times and economy. Our girl NeNe Leakes sitcom is one of the casualties of the NBC cancellations. Ryan Murphy’s ‘The New Normal‘ has been cancelled.

“I worked wit some of the most amazing people ever on the New Normal!  I love u all!  We will meet again.” 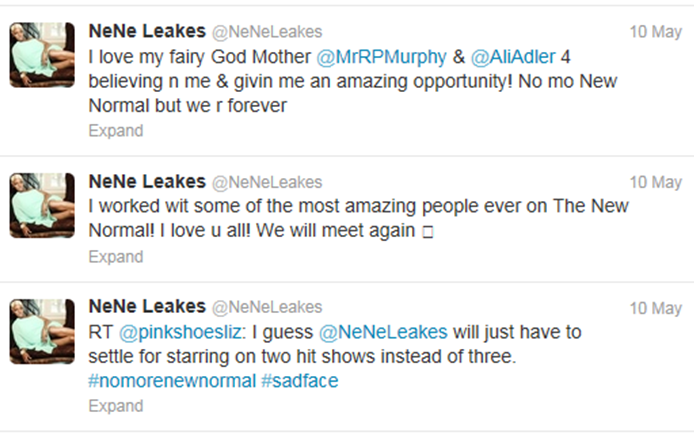 NeNe, got her big acting break when she was cast in both The New Normal and Glee by a big fan, producer Ryan Murphy.   NeNe thanked Ryan and producer, Ali Adler, a  BIG THANK YOU on Twitter,

“I love my fairy God Mother @MrRPMurphy & @AliAdler4 believing n me & givin me an amazing opportunity!  No mo New Normal but we r forever.”

NeNe Leakes, starred with  Justin Bartha and Andrew Rannells as a gay couple starting a family via surrogacy. The show did end on a positive note with the birth of the baby on the season finale.

The show was canceled due to low ratings along with several other shows including Jennifer Hudson’s “SMASH“.

We know that this is just the beginning for NeNe Leakes.

Did you ever watch “The New Normal“?

Story via The Jasmine Brand.