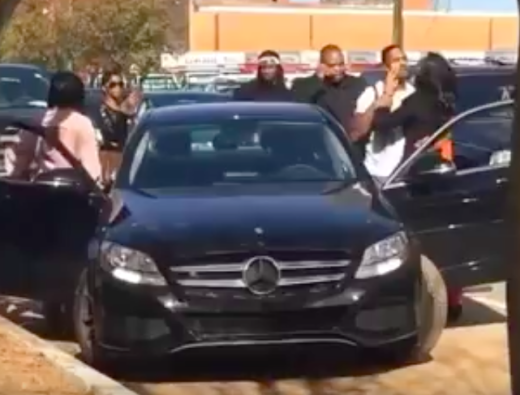 Love and Hip Hop Atlanta Season 5 will be premiering on April 4 but the drama has already popped off between some of its cast members.

Some of the cast members had just finished shooting a scene inside of a venue on Peters St in Atlanta when one of the new members of the show got into it with Stevie J and Joseline Hernandez.

The drama unfolded as new member of LHHA, Tommiee, was seen getting mouthing off viciously at the Puerto Rican Princess.

After the three finished filming their scene of LHHA and was heading to their car an argument broke out between Josefine and Tommie.

The argument got so heated Tommie was baiting Josefine into fighting by shouting out what had secretly been going on between her and Stevie J behind Joseline’s back. All of this was happening while Stevie J was trying to put Tommie in her car.

Unfortunately, the cameras were not rolling to catch the incident but we are sure that this will pop up at some point during season 5 of LHHA.

Shortly after the incident Joseline posted a video on IG addressing the incident saying that she is just trying to enjoy herself while these b@!#$ are out here losing they mind in the middle of Peters St.

At first all he wanted was a big booty girl for his birthday, then he got it and this year he want to time...
Read more
Celebrity News

It's been a long journey, and Greg hung in there long as he could.   View this post on Instagram   A post shared by freddyo (@freddyoart) //www.instagram.com/embed.js Greg was...
Read more
New Artist

Bet's new reality show "Encore" was all about taking female artist from past girl groups and form a super group, they started with 9...
Read more
Celebrity News