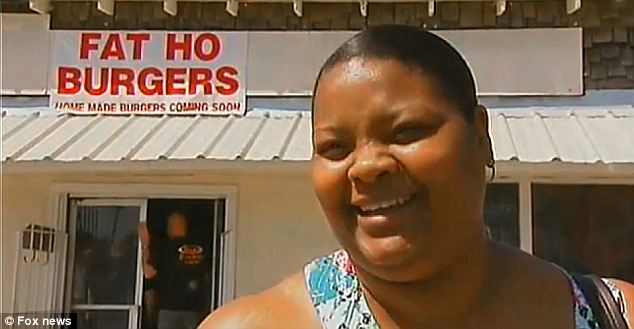 Anyone that really knows me knows I really love to eat, so after I heard this story I new I had to post it. A 23-year-old Waco, Texas native Lakita Evans worked her way through college so that she could open her own restaurant.

That’s pretty much the American dream, so why are people in the community’s feathers ruffled? Because she decided to call her restaurant “Fat Ho Burgers.”

Evans says the name is all in good fun, and hopes that people won’t take it too seriously. “Look what’s going on in Japan. It’s clear this world is not gonna get any better. Why cry and be depressed? …Somebody’s gotta keep a sense of humor around here.” While the patrons of the Gospel Cafe around the corner aren’t thrilled, you’ve gotta admit it’s pretty funny to watch a middle-aged white guy order a “Supa Dupa Fly Ho with Cheese.”

Run by 23-year-old Lakita Evans, Ho’s has queues out of the door at lunch times and has garnered good write ups from the critics.

She said: ‘Itâ€™s not calling people a ho. Itâ€™s just like they say, ‘Oooh that ho is big,’ or, ‘That ho is tight!â€™’. As well as defining ‘ho’, Miss Evans added the name was a way of cheering up customers weighed down by the economy and everything thats going in the world.

‘Look whatâ€™s going on in Japan. Itâ€™s like clear this world is not gonna get any better. Why cry and be depressed,’ she added.

‘The economy is bad. Somebody gotta keep a sense of humour around here.’ Get this the restaurant even does kids ‘Tiny Ho’ meals Despite being a hit with the customers, the nearby Gospel Cafe and book shop has taken exception to the name. Pastor Marsha Martie, who volunteers at the quiet neighbourhood establishment, said: ‘I wish they would have had a more sensitive name.