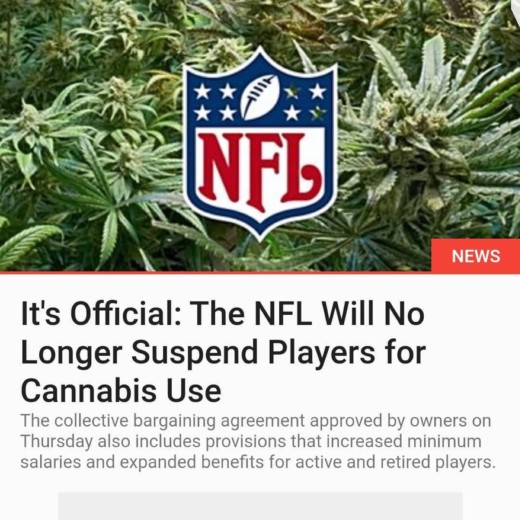 Boom Shack Ka Lack BOOM…….. Players in the National Football League will no longer face suspensions if they test positive for marijuana under a new collective bargaining agreement approved by team owners on Thursday. The agreement is now being circulated among players, who are expected to consider the new terms with their representatives during a conference call this Friday.

If the agreement is ratified, the league would implement several changes to its drug policy covering the use of cannabis by players. The new policy would reduce the penalties for players who test positive for THC, including the elimination of game suspensions solely for a positive test result, according to a fact sheet released by the NFL Players Association that covers the agreement’s key terms.

The new policy would also reduce the number of players subject to testing for THC and would shorten the window during which they may be tested from four months to only two weeks at the beginning of training camp each season. The limit for THC metabolites detected in a drug test would also be increased from 35 ng/mL to 150 ng/mL.