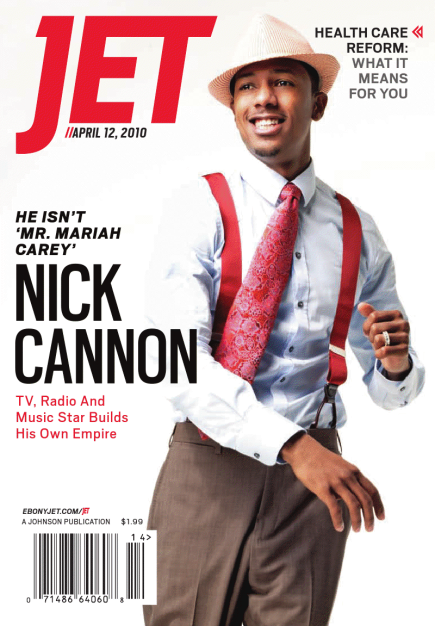 The YBF is reporting that Nick Cannon wants everybody to know his wife Mariah didnâ€™t make him who he isâ€¦or his bank account. And heâ€™s covering the new issue of JET thatâ€™s on stands today. Hereâ€™s a snippet from his cover story:

Nick Cannon laughs when people call him â€œMr. Mariah Carey,â€ even though heâ€™s been married to his wife, Mariah, for two years now. The self-professed â€œentrepretainerâ€ â€“ an entrepreneur first and entertainer second â€“ is certainly accomplished in his own right. He became a millionaire at 15 and is the CEO of his own multi-media company, NCredible Entertainment and chairman of the Teen Nick television network. â€œThat type of stuff is humorous to me,â€ he tells Jet. â€œIf I were an insecure individual or if that was true, that type of statement â€“ that Iâ€™m a â€˜boy toyâ€™ or â€˜yes manâ€™ and all that type of stuff â€“ would bother me. But anybody who knows me or talks to me for five minutes knows clearly thatâ€™s not the picture.â€

I know we might want to hate but Nickâ€™s entertainment business game is something serious. And we canâ€™t help but respect that. What yall think?

It's been a long journey, and Greg hung in there long as he could.   View this post on Instagram   A post shared by freddyo (@freddyoart) //www.instagram.com/embed.js Greg was...
Read more
music