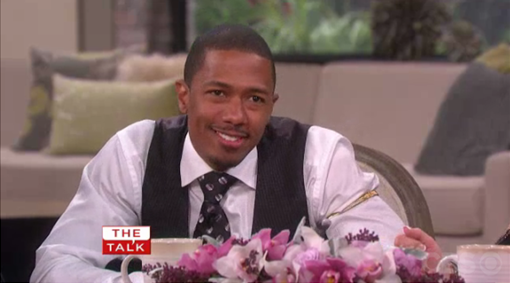 Mariah Carey did not sign up for LOVE & HIP HOP!

“It’s kind of unfortunate,” he told the ladies at The Talk. “When you see someone like my wife, who tries to remain classy and tries to take the high road, it feels like everybody else around it — including the network and the producers — feed into this whole sound bite drama. It feels like it lacks substance.”

Nick seems to think that Nicki Minaji has bought into the mean judge persona and is trying to do this to garner ratings for the network opposed to Mariah who just want to have fun and enjoy the music. Nick called the situation “unfortunate,” and he believes that America is tired of the bickering. “I think America in general is tired of seeing the mean judges and people be mean to people. They’re over it,” he said, adding, “In the book of Mariah Carey, American Idol will be a footnote.”

Nick reveals that Mariah had a premonition that things were going to go sour. “My wife foreseen all of this,” Nick made a point to say that he has no proof that the producers are purposefully trying to cause problems but their inactions seems to tell the story. Bad blood equals to ratings.

“She tried to tell the network, ‘I don’t think this is going to work. I’m afraid. I don’t need this. I’m doing this for the brand of ‘American Idol’  … and I love this show, but you’re kind of taking it in the wrong direction because this is going to turn into one of those reality shows. I didn’t sign up to be on ‘Love and Hip-Hop.’ “

What do you think about the American Idol Feud?