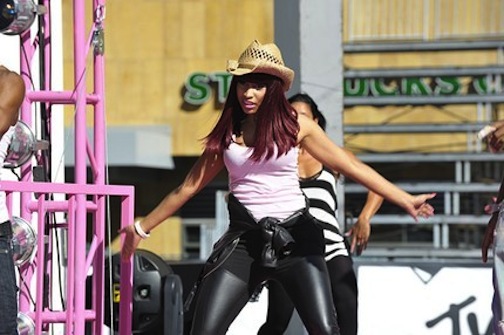 Could Nicki Minaj be the next Lady Gaga? Laurie Ann Gibson certainly thinks so. Choreographer extraordinaire Gibson worked with Gaga to create the dance chemistry in Gaga’s MTV Video Music Award-winning “Bad Romance” video and also put together Minaj’s VMA pre-show dance routine for her song “Check It Out,” with will.i.am.

Minaj, who was dressed in a pink-and-purple spacesuit and coiffed with a cotton-candy-colored wig, impressed her live audience with her dance moves. Accompanied by two dancers in matching outfits, Minaj stood stock-still like a futuristic superhero for the song’s intro before wiggling her hips into the Gibson-choreographed moves.

Gibson, who MTV viewers will remember from Sean (Diddy) Combs’ “Making the Band,” told MTV News that Minaj has the makings of a superstar. “What I love about Nicki is she has the eye of the tiger and she is fearless,” Gibson said. “These are the components that I saw about three years ago in Lady Gaga. I thought, ‘This is going to be fantastic.’ Her swag is amazing.”

And just what was that robotic movement we saw Minaj do during her performance? “The idea is that we’re Barbies landing from outer space,” Gibson explained. “It’s doll-like. It’s amazing.”

Here are some pictures of Nicki MinajÂ getting ready to show out at the awards. She always adds her touch to everything she does. What yall think?-Â  Courtney L.