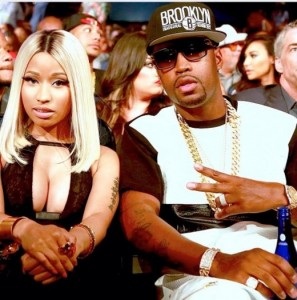 Nicki Minaj and her ex-boyfriend Safaree Samuels took a number of shots at each other on Twitter over the weekend after reports surfaced that they had broken up.

This weekend, Nicki Minaj and ex-boyfriend Safaree Samuels took turns blasting each other over their relationship via Twitter. US Weekly reports that the ‘Anaconda’ rapper started the debacle with the following tweet:

“Even when I try to protect ppl, they still try to take advantage of me. Haven’t u learned that God is in control? Stop while you’re ahead.”

She continued her rant with the following tweets:

“Anything you don’t appreciate will be taken. God sees your ungrateful evil soul. I gave and gave and gave. Threatening me? Blackmail? Jump.”

“30K watch the night my cousin was killed on the street like a dog. More than rappers. But it was never enough. Don’t make me. Too much love.”

Once Samuels heard about the tweets, US Weekly reports that he defended himself: “Im doing interviews about my s–t and s–t im promoting.. not 1 thing said im doing interviews about nicki. yall sound ridiculous,” he said. “and speaking to some1 about pub and splits isnt blackmail. stop looking for pitty.. u handle your buisness why cant i? and its not Bout fame its about respect and youve had 0 for me the pass few years.the 0 respect u had for me at home had nothing 2do w/music.”

Samuels seemed upset that their private issues were being publicly discussed on social media:

“Its so ridiculous that instead of hitting my phone u come on here,” he wrote. “I cant believe were doin dis. We use 2 laugh at ppl 4 this.”

The Twitter argument seemed to end afterward when Minaj posted an apology about her comments and have since removed the bashing tweets:

“I’m sorry. My fans know this isn’t me. Hate this. But I’m human. I do so much. Too much. No man would have stayed loyal in this game like me.”