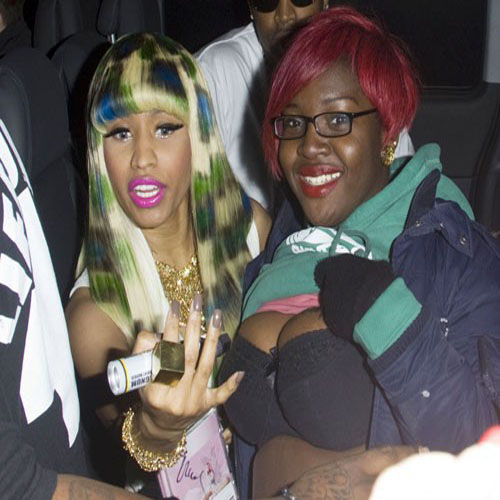 Spotted over on the homegirl Courtneyluv, Nicki Minaj wearing a colored leopard print hairdo was spotted leaving T4 studios in London on Friday evening (January 21).
The “Your Love” singer was fresh off of filming a television spot as she happily stopped to sign a female fan’s breast before heading to her new hotel after getting the boot from the Dorchester. I wonder if the chick is going to take a bath afterwards? Nick tweeted, “long day of press only to find out we’ve officially been kicked out the hotel! Lmaoooooooo. Rescue me barbz!!!! Pleeeeeeeasse *martha voice*” … Wow Nicki you can’t be getting kicked out! Click after the beat to see more pics