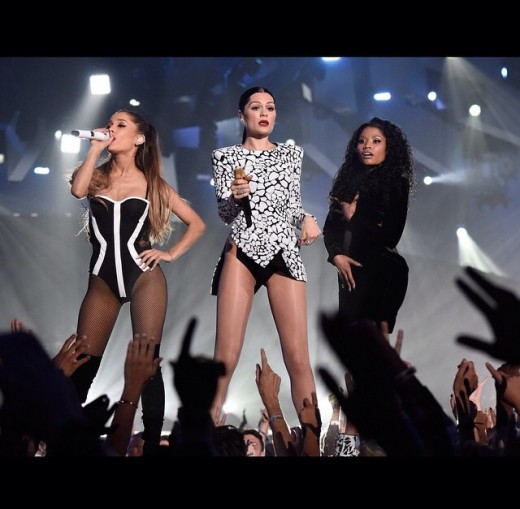 Sources are accusing Nicki Minaj of pulling a wardrobe malfunction stunt at the VMAs. Check out what is being said about her “Bang Bang” performance with Ariana Grande and Jesse J below.

Fans are still wondering what was up with Nicki Minaj’s apparent wardrobe malfunction at the MTV Video Music Awards Sunday.  As Nicki took the stage with her “Bang Bang” collaborators Ariana Grande and Jesse J, she seemed to hold her unzipped dress together at the chest.

Sources tell TMZ.com that Nicki pulled the same stunt during rehearsals on the morning of the show.  One person watching even thought Nicki was holding together a robe.

Meantime, Nicki insists it was a genuine wardrobe malfunction.  She tells “The Hollywood Reporter” that she simply ran out of time when changing costumes from her earlier performance of her new song “Anaconda.” She then took to Instagram to say,

“God is good. As long as a nipple didn’t come out to play, I’m fine. Love my team. CASPER, Rushka, Adam, Oscar, Joyce, Gee… Many more to name but they’re all winners! No weak links. There’s no greater feeling than having ppl who inspire u and who work passionately and relentlessly to get the job done.”