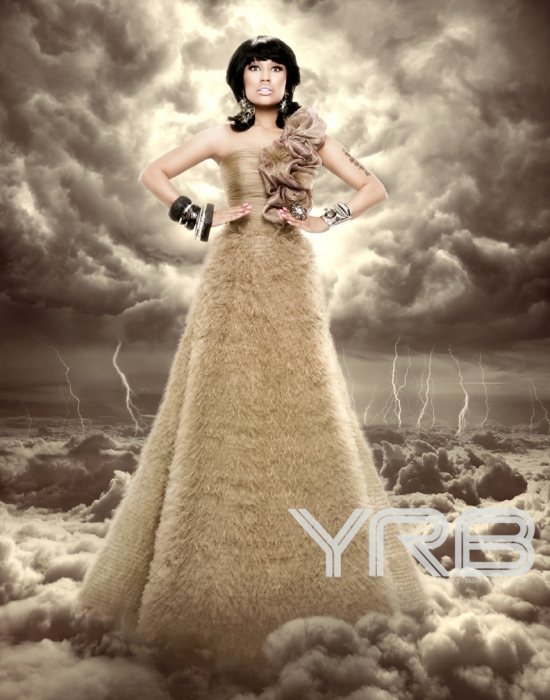 Nicki Minaj’s recently set down with YRB magazine to speak about life, love, Rappers that hate, and most importantly her new album “Pink Friday”. Here’s part of what she said:

On Female Rappers Who Donâ€™t Support Her

These girls arenâ€™t mad at me. Theyâ€™re mad at themselves,â€ she states, shooting down questions on why she never took Kimâ€™s bait. â€œ[Itâ€™s] jealousy, insecurity and being broke. When you havenâ€™t capitalized and you see Iâ€™m about to capitalize on this sh*t like itâ€™s never been done before, then youâ€™re mad at yourself.

On being afraid to release her album
I

was so afraid to put out an album for fear of failure. I wanted to put my album out on Valentineâ€™s Day of 2011. And my label was like, are you f*cking crazy?â€

In over news Nicki Minaj is revealing more details about her upcoming debut album, “Pink Friday.” The Young Money rapper’s first effort will feature 17 tracks, including the hit singles “Check It Out” and “Your Love.” The record will also include the Eminem collaboration “Roman’s Revenge,” as well as the Kanye West-assisted track “Blazin.” Rihanna,Â will.i.am, Drake and Natasha Bedingfield will also make cameos on “Pink Friday.” Nicki Minaj recently discussed her willingness to work with other female artists, telling MTV’s “RapFix Live,” quote, “The women in the game, I never say I would never work with them because, in fact, if there’s an opportunity for me to work with them, and it’s a way that we can kill the game and do something crazy, why would I turn that down?” Nicki Minaj’s “Pink Friday” is due in stores November 22nd.