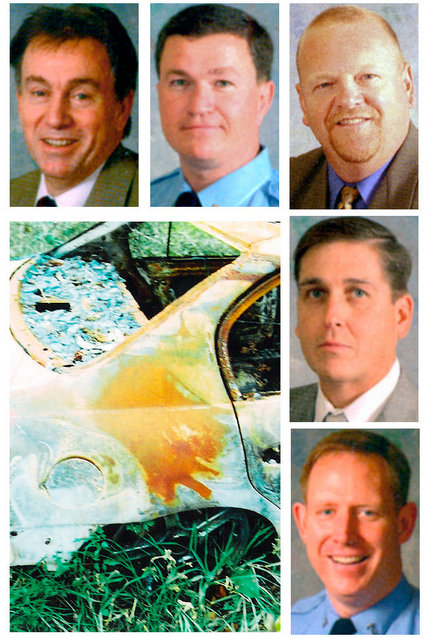 According to Nola.com,Â  five current or former New Orleans police officers were indicted in federal court this pastÂ Friday in the shooting death of a man in the days after Hurricane Katrina and burning of his body.

Federal prosecutors allege that one NOPD officer fatally shot 31-year-old Henry Glover without justification, and that other officers burnt Glover’s body and left it in a torched car beside a levee. The 11-count indictment also alleges two other officers lied and helped cover up the incident.
Charged are former officers David Warren and Lt. Robert Italiano, and three current cops, Lt. Travis McCabe, Lt. Dwayne Scheuermann and Officer Greg McRae .
The indictments are an extraordinary blow to a long-troubled police force reeling from revelations in another post-Katrina fatal police shooting, that one at the Danziger Bridge in eastern New Orleans.
Warren, a rookie cop at the time of the incident, is accused of shooting Glover to death. He faces life in prison if convicted. The charge — deprivation of rights under color of law — is a capital offense, though the U.S. attorney general would have to make the decision to seek the death penalty, U.S. Attorney Jim Letten said Friday. Warren is also charged with using a weapon during the commission of a crime, a felony that carries a minimum sentence of 10 years in prison. Warren left the force in 2008.
Scheuermann and McRae are each charged with five felony counts. They allegedly beat two men who took Glover to a makeshift police compound in search of assistance. The grand jury also determined that Scheuermann and McRae burnt Glover’s body and obstructed a federal investigation by destroying evidence. If convicted, they each face up to 60 years in prison.
Those indicted in the Henry Glover case are, from top left, Robert Italiano, Travis McCabe, Greg McRae, Dwayne Scheuermann and David Warren. The car is the one in which Glover’s body was found on the Algiers Point levee shortly after Hurricane Katrina.
The government alleges that Italiano and McCabe covered up the incident by fabricating a report with the intent to mislead any further investigation. The duo is also charged with lying to FBI agents about the case. McCabe is also charged with perjury.

Italiano, if convicted, could be sentenced up to 25 years in prison. McCabe faces a maximum sentence of 30 years if he is convicted. – They need to ask for forgiveness.- Written by Courtney L.