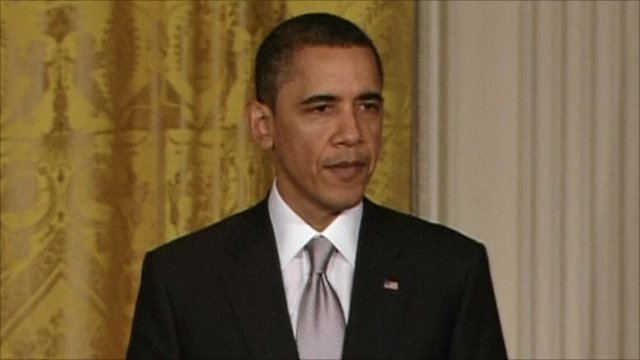 As Libyans in the United States cheered the death of Moammar Gadhafi, President Barack Obama on Thursday called the fate of the former Libyan leader both the end of a “long and painful chapter for the people of Libya” and the hallmark of a successful U.S. foreign policy. In the first official government remarks on the killing of a longtime foe who was behind terrorist attacks against U.S. citizens, Obama pledged American support as Libya builds a democratic system from the ruins of dictatorship.

“You have won your revolution,” he said to the Libyan people.Obama also praised the efforts of U.S. military personnel who took part in the NATO-led military mission that launched thousands of airstrikes in support of Libya’s rebel forces.

“Without putting a single U.S. service member on the ground, we achieved our objectives,” Obama said in heralding a strategy that “demonstrated what collective action can achieve in the 21st century.”

In an obvious reference to Syria and the crackdown on dissent by President Bashar al-Assad, Obama noted that Gadhafi’s death proved “once more that the rule of an iron fist inevitably comes to an end.”

“Across the Arab world, citizens have stood up to claim their rights,” the president said. “Youth are delivering a powerful rebuke to dictatorship, and those leaders who try to deny human dignity will not succeed.” His statement, delivered in the White House Rose Garden, followed hours of silence by top government officials as initial reports that Gadhafi had been captured or killed emerged from Libya.

It was a very different scene hours later outside the White House, as dozens of people waved and wrapped themselves in the Libyan flag while cheering Gadhafi’s death. Many sang to the beat of a drum Thursday evening, while one celebrant held a hand-drawn sign showing a newborn baby drawn over the outline of Libya — symbolizing a country reborn. The news of Gadhafi’s death marked the end of the seven-month NATO-led Libya campaign initially spearheaded by the United States to prevent Gadhafi’s forces from attacking Benghazi, the opposition stronghold.

In other news, Gadhafi has yet to be buried.Moammar Gadhafi’s blood-streaked body has been stashed in a commercial freezer at a shopping center as Libyans try to keep it away from crowds as they figure out where and when to bury the hated leader. The body, stripped to the waist and wearing beige trousers, is laid on a bloody mattress on the floor of a room-sized freezer where restaurants and stores in the center keep perishables. A bullet hole is visible on the left side of his head and in the center of his chest. Dried blood streaks his arms and head.

What are your thoughts and opinions on this issue?