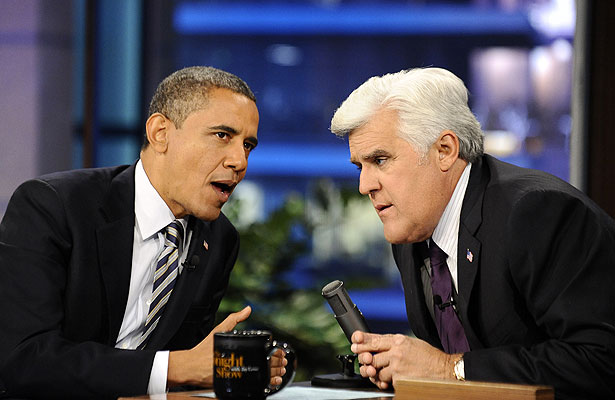 President Obama had the chance to show off his humorous side last night, on Â ‘The Tonight Show’ with Jay Leno. While there he gave details on his visit to the famous L.A. restaurant Roscoe’s Chicken and Waffles. He also spoke on the NBA Lockout, The Kardashians, Â Gadhafi, and why Osama Bin Laden’s body was never shown.

On the NBA lockout

Well, look, if you look at the NFL, they were able to settle theirs â€” and I think they understood. Players were making millions of dollars. Owners, some of us are worth billions of dollars. We should be able to figure out how to split a $9 billion pot so that our fans, who are allowing us to make all of this money, can actually have a good season. And I think the owners and the basketball players need to think the same way.

I think they need to remind themselves that the reason they are so successful is because a whole lot of folks out there love basketball. Basketball has actually done well, but these types of lockouts take a long time to recover from.

On â€œKeeping Up With The Kardashiansâ€
Iâ€™m probably a little biased against reality TVÂ [cue rimshot!], partly because thereâ€™s this program on C-Span called Congress. But no, I have not seen the showâ€¦[but] I think the girls have seen it.

On Muammar Gaddafi
Well, this is somebody who for 40 years, has terrorized his country and supported terrorism. And he had an opportunity during the Arab spring to finally let loose of his grip on power and to peacefully transition into democracy. We gave him ample opportunity, and he wouldnâ€™t do it. And, obviously, you never like to see anybody come to the kind of end that he did, but I think it obviously sends a strong message around the world to dictators.

On why pictures of Osama Bin Ladenâ€™s dead body were not released to the public
There was a reason after Bin Laden was killed, for example, we didnâ€™t release the photograph. You know, I think that thereâ€™s a certain decorum with which you treat the dead even if itâ€™s somebody who has done terrible things.

On what he order at Roscoeâ€™s Chicken and Waffles
Wings and waffles with hot sauce. Originally, it was just a way to be out there and say hi to everybody, but once we got in the car, it smelled pretty good.

Check out a portion of the videos below.

Our favorite awkward black girl, Issa Rae, confirms that “Insecure” is to end with its fifth season! Over the last several years we have...
Read more
Politics