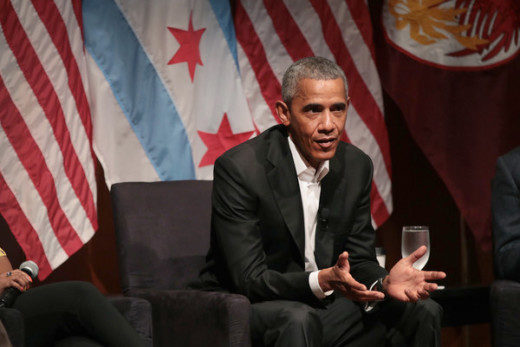 A spokesperson for Barack Obama had to check some folks who are up in arms over the former president getting paid $400,000 for speech. As if he’s the only former President whose gotten a check for speaking.

So here’s why folks are mad. Mr. Obama is set to make a speech at a health care conference in September and he’s set to be paid $400,000 from a Wall Street company, Cantor Fitzgerald (a trading and investment firm). Some feel like the speaking fee undermines everything he believes in as he’s criticized the excessive purse strings of wall street before.

We guess folks forgot so did every President, like Reagan, took MILLIONS from them post-Presidency for speaking engagements. Sounds like they want Obama to be “special” and not get what he’s due.

Obama’s spokesman Eric Schultz is defending his speech, saying Obama decided to speak at the event because health care changes are important to him. And he noted that No. 44 raised more money from Wall Street than any candidate in history.

“He recently accepted an invitation to speak at a health care conference in September, because, as a President who successfully passed health insurance reform, it’s an issue of great important to him. With regard to this or any speech involving Wall Street sponsors, I’d just point out that in 2008, Barack Obama raised more money from Wall Street than any candidate in history — and still went on to successfully pass and implement the toughest reforms on Wall Street since [President Franklin D. Roosevelt].”