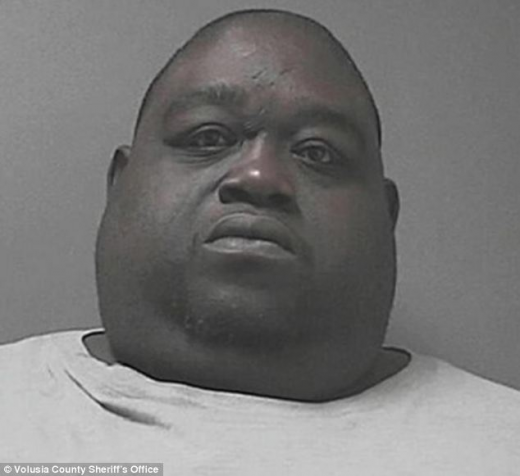 A Florida Drug dealer by the name of “Fat Man” was spotted riding around without a seatbelt in Florida and upon investigation they found drugs tucked in the creases of his belly fat. This is not a joke….True STORY!

Check out the details below.
A central Florida man Christopher Mitchell, 42 who weighs about 450 pounds faces multiple charges after sheriff’s deputies say he hid cocaine and 23 grams of marijuana under his “stomach fat.”

According to a new release, a Volusia County sheriff’s deputy stopped a vehicle Friday after noticing that the passenger wasn’t wearing a seatbelt.

Officials say 42-year-old Christopher Mitchell told the deputy that he’s too big to wear a seatbelt. The deputy says he requested a drug-detecting dog because Mitchell and the driver appeared nervous. The dog detected the presence of drugs in the vehicle.

In addition to the drugs on Mitchell, deputies say they also found a handgun and $7,000 in cash in the vehicle.

Mitchell and the driver were arrested. It was not clear whether Mitchell has an attorney. Real life is better than any story we can ever try to make up. What do you think about hiding stuff in fat?

Every year Big Boi shows appreciation to his Big Kidz Foundation board members by hosting an annual holiday party and Fundraiser. This year was no different, Atlanta...
Read more
Artist Spotlight

Ray-J Comes Under Fire For Callin Fan An Ape, But Was He Justified?

Brandy's little brother goes hard on a fan after being teased on I.G. And now it seems Tina Chastang can't handle the heat. And...
Read more
Tom Foolery

Chaka Khan Is Not Having @Beyonce Hate, Apologizes For Media’s Attempts!

You just knew the kumbaya moment of having our first gay NFL player wouldn't last long. It seems the media is trying to create...
Read more