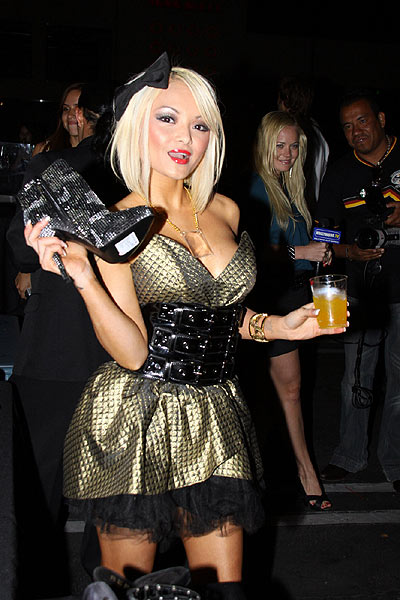 According to Starpulse, no one was sure what Tila Tequila is doing with a snakeskin boot at a party at Fred Segal’s in Los Angeles on Thursday, but she’s obviously having a good time.

Tila recently went on a rant on her Twitter about her “multiple personalities” and how one of them, “Jane,” is trying to kill her. We don’t know if that’s Tila or Jane in these pictures though.

The reality star, born Tila Nguyen, spent most of her childhood in Houston, Texas, and allegedly got her nickname after an adverse reaction to the alcohol. Tila’s fame, came in the form of her MySpace personality. By early 2007 she had over 1.7 million friends. Click below to see additional pictures!

The bisexual star has since searched for love on several seasons of “A Shot at Love With Tila Tequila” on MTV. Unbelievably, she “shot” up further in popularity after her fiancee Casey Johnson died.

Tila recently signed up to star on the new season of “Celebrity Rehab” in a bid to clean up her act following the death of her partner Casey in December. Other than that, we’re not sure why she’s famous anymore.