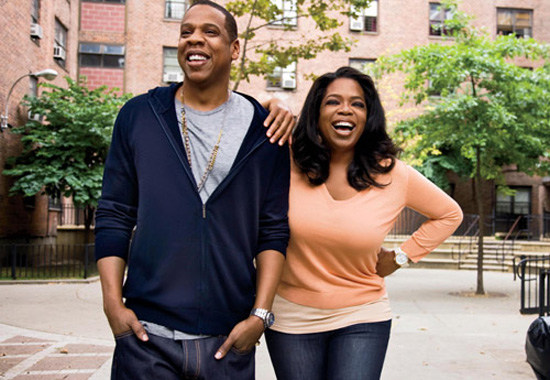 The Drewreports is reporting that Oprah Winfrey who over the years stated she had a ban of rappers on her Oprah show. Decides to launch her new TV channel OWN (Oprah Winfrey Network) by having on Jay-Z.Â The preimiere episode will feature Jay-Z and Condoleezza Rice in a new series titled Master Class, that features celebrities and politicians relaying real life stories into the camera.Â Â Jay-Z told The Wall Street Journal he immediately accepted Winfreyâ€™s offer to be included on a show on OWN, which will launch on January 1st 2011 as a joint venture between Winfreyâ€™s Harpo Inc. and The Discovery Network. â€œI didnâ€™t even think about it,â€ Jay-Z said. â€œI just said â€˜yes.â€™â€Â Â Other shows include Life Is Not a Straight Line, Note to Self, Swell and Visionaries: Inside the Creative Mind, which will spotlight Lady Gaga and Avatar director James Cameron.Â Â Oprah has announced her syndicated talk show will end in September 2011, and that it will not continue on OWN thereafter. However she will host a new prime-time show on the channel called Oprahâ€™s Next Chapter two or three times a week.