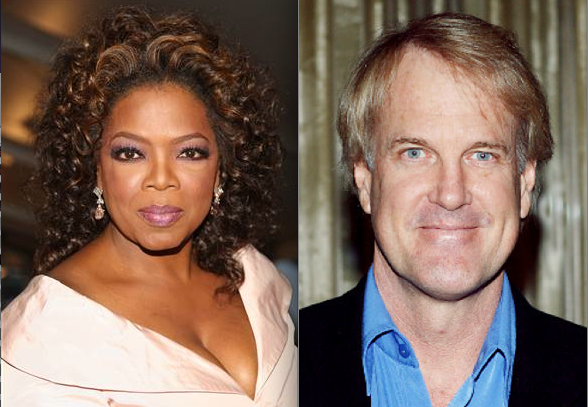 Before Oprah loved Stedman, there was John Tesh. An exclusive excerpt from Kitty Kelley’s upcoming tell-all Oprah Winfrey biography claims the talk-show queen enjoyed a 1970s romance with an unlikely live-in lover: John Tesh. Tesh and Winfrey shared her Nashville apartment until he got the hell on in the middle of the night, according to the first-ever look inside the book, obtained by the Daily News.

According to Kelley, the “social pressure” on an interracial couple in Tennessee at that time proved too much for Tesh to handle.

“He said one night he looked down and saw his white body next to her black body and couldn’t take it anymore,” another Tesh ex-paramour told Kelley.”

“He walked out in the middle of the night. … He told me he later felt very guilty about it.”

Winfrey spokeswoman Angela DePaul said Saturday that Oprah was not commenting on the highly anticipated book. A phone call and an e-mail to Tesh’s spokespeople were not returned.

Tesh worked in Nashville at the same time as Winfrey during the mid-’70s. Future media mogul Winfrey was just 20 when she joined the staff at WTVF-TV in Nashville. Tesh was a news anchor and future “Wheel of Fortune” host Pat Sajak was a weatherman at rival WSM.

Kelley – best known for her withering biographies of Frank Sinatra, Nancy Reagan and Elizabeth Taylor, among others – said the pair lived together “for a short time” before Tesh’s midnight moveout. By 1976, both had moved on – Winfrey to Baltimore, and Tesh to WCBS-TV in New York. Both went on to bigger and better things: Tesh hosted “Entertainment Tonight” from 1986-1996 before leaving the show to become a full-time New Age musician.

The six-time Emmy winner now hosts his own nationally syndicated radio show, has written a number of books and continues to tour. Kelley mentions that Tesh appeared with Winfrey on the 10th anniversary of her show in 1996, with Oprah claiming the pair shared one platonic dinner date. Tesh is married to actress Connie Sellecca, while Winfrey remains connected to longtime beau Stedman Graham.

The excerpt also references Winfrey’s mid-’70s fondness for junk food – especially chocolate Ding Dongs – and a local restaurant called The Chicken Shack. Winfrey and co-anchor Harry Chapman would dine on the spicy chicken, seasoned with cayenne pepper and Tabasco sauce, between weekend newscasts, according to Kelley.