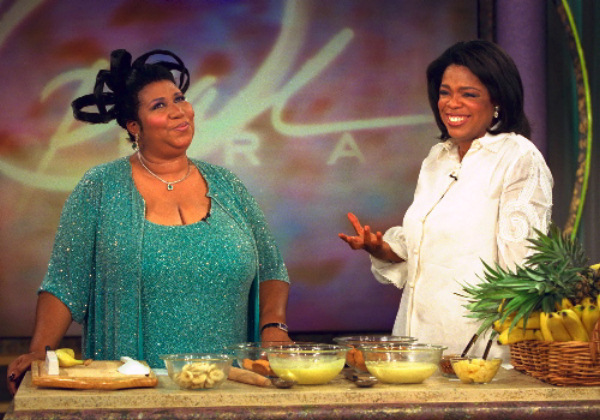 As we all know, Last week the “How You Doing” lady, Wendy Williams had the honor and privilege to be the first “National Talk Show” to interview Aretha Franklin, since she took ill and recovering from high risk pancreatic cancer surgery. Oprah was very eager to administer her welcome back to her fans interview, she even had big shots Smokey Robinson, Stevie Wonder, and Berry Gordy the Founder of Motown scheduled to do a tribute for her. But that wasn’t good enough obviously because Wendy Williams won that battle.

Checkout what the National Inquirer had to say:

OPRAH WINFREY became “rip-roaring furious” that ARETHA FRANKLIN showed her NO respect by granting one of her fierce TV rivals a major interview over the desperate battle she’s waging with cancer, The ENQUIRER has learned.

Instead of choosing the undisputed Queen of Talk to describe her emergency surgery and courageous struggle, the Queen of Soul gave the first interview to WENDY WILLIAMS.

“Oprah is about as angry as can be,” said an insider.

“This is the final season of her show, and she’s been pushing to land all the big ‘gets’ out there. Oprah is embarrassed that Aretha – a legend – chose Wendy, who is a relative newcomer in the TV talk show world.”

While Oprah, 57, gives Wendy, 46, credit for snagging the much-coveted sit-down with Aretha, she’s still “steaming,” adds the insider, telling pals that Wendy’s show is “a long way” from hers, and criticizing it for being “silly and gossipy.”

Aretha underwent surgery in December but has never publicly revealed the nature of her health issues. However, The ENQUIRER has exclusively reported that she is fighting pancreatic cancer, one of the most deadly forms of the disease.

Following her operation, the 68-year-old “Respect” singer made her spotlight appearance in a videotaped message that was broadcast during the Grammy Awards.

Aretha shocked fans by looking like she had lost about 80 pounds from her once 300-pound frame. Because of the intense curiosity about Aretha’s condition, scoring an interview with Aretha was a major coup for Wendy.

Yet Oprah insisted she would’ve been able to outdo Wendy by using her clout to pack her show with legendary heavy hitters paying homage to the musical icon.

“Oprah was not going to keep the whole interview on the illness, which she knows Aretha is reluctant to fully discuss,” said the source.

“She was going to get Stevie Wonder, Smokey Robinson and Berry Gordy, the founder of Motown Records, for a touching tribute. But instead, Aretha chose Wendy – and Oprah is NOT happy!”