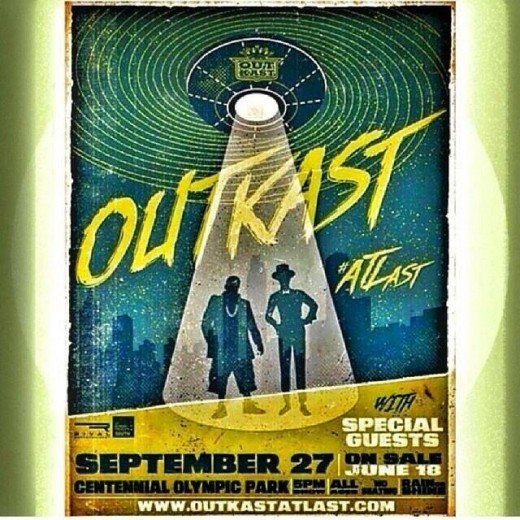 Iconic Outkast is back and they are coming home; tickets goes on sale today and they have announced Kid Cudi, Childish Gambino and Raury will perform at the highly anticipated #ATLast Concert.

This has been the time us TRUE ATLIENS have been waiting on for years and years and years. Outkast composed of Antwan “Big Boi” Patton and André “3000” Benjamin is coming home for an amazing concert at Atlanta’s Centennial Olympic Park on Saturday, September 27, 2014 #ATLast!

Public on-sale begins today, Wednesday, June 18 at 10am EST via Ticketmaster. Additionally, a dedicated website has been launched to provide the most current show information as additional announcements are made: www.outkastatlast.com

The band announced Kid Cudi, Childish Gambino and Raury will join the #ATLast stage. This is the first of many friends of the band that fans can expect to see that evening.

If you in the A or plans on coming to the A……get your tickets today!