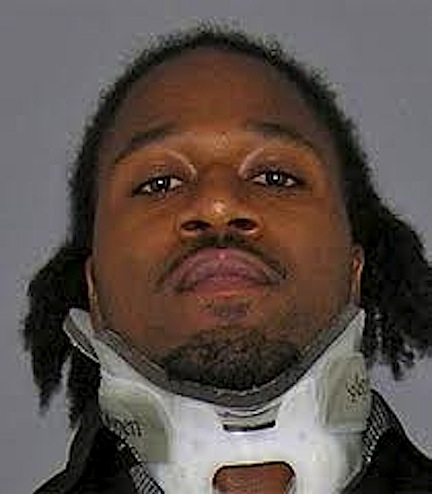 Cincinnati Bengals cornerback Adam “Pacman” Jones was arrested early Sunday morning and charged with two misdemeanors after an incident at a downtown bar. Jone spoke with news media after he was released from jail Sunday and said he hadn’t been drinking before police arrested him and charged him with disorderly conduct while intoxicated and resisting arrest. Jones was escorted out of the bar after refusing to calm down and resisted arrest outside by pulling away as officers tried to place him in handcuffs.

“I was with my wife. It was her birthday. It don’t make sense,” Jones said in video posted on WCPO’s website. “There is no reason why I should have got locked up.”

Jones said he wasn’t yelling profanities inside the bar, as court documents claim, and that he didn’t resist arrest either.
“I’m in a neck brace. How am I resisting arrest?” Jones said. “I just had surgery.”

Jones, 27, played just five games for the Bengals last season after they signed him to an undisclosed contract. He was placed on injured reserve with a herniated disc in his neck, an injury he suffered October 24 during a game in Atlanta. P.S. The neck brace is from a football accident…. LOL keep him in yall prayers yall…