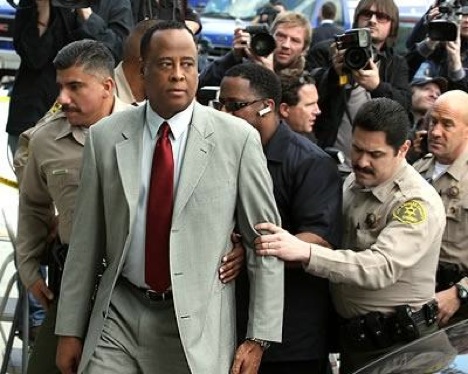 Dr. Conrad Murray was in a Los Angeles courtroom Monday afternoon, as the physician was finally charged in connection with the death of pop icon Michael Jackson. The former doctor to the “King of Pop” was arraigned on involuntary manslaughter charges and released on 75-thousand dollars bond. Members of the Jackson family including mother Katherine, father Joe, and brothers Tito, Jermaine, and Randy were present during the hearing. As the judge considered bail, prosecutors noted that Murray had missed court appearances in Las Vegas and asked that bond be set at 300-thousand dollars. Murray’s attorney countered, saying his client is not a flight risk.
The Los Angeles County coroner’s office has identified Jackson’s death as “acute propofol intoxication.” The drug is a powerful sedative generally administered only in a hospital setting by an anesthesiologist. As a condition of bail, Los Angeles Superior Court Judge Keith Schwartz said Murray can not be in possession of, or prescribe, anesthetics. The doctor had to surrender his passport as well. Following the session the California Medical Board moved to have Murray’s medical license revoked. Murray is due back in court April 5th. A preliminary hearing date will be set at that time.
Murray’s attorneys are feeling confident that their client will be exonerated in the case. Speaking outside of Los Angeles’ Airport Court on Monday, Murray’s attorney Ed Chernoff said the long delay in filing charges against Murray signals an uphill battle for prosecutors.