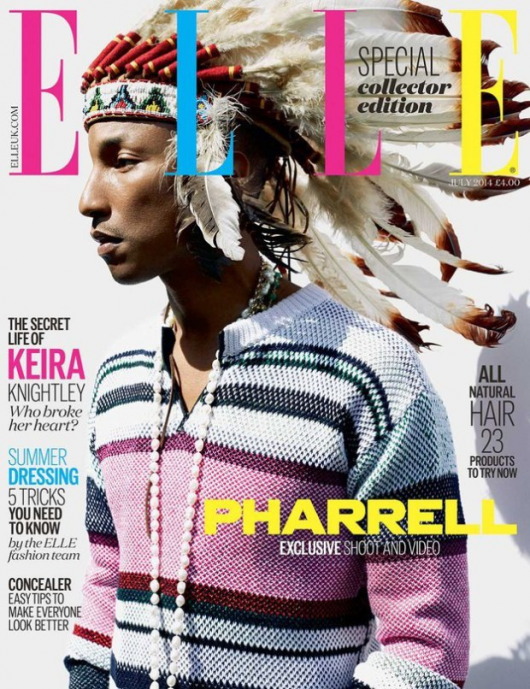 Pharrell is the master of Happy but some of his fans are not feeling it due to his recent decision of rocking a Native American headress on the cover ‘Elle UK’.
Check out the details below.

Rocking a headdress is the equivalent of rocking black face for Native Americans. You know if anybody chose to rock a black face we would scream racist and ruin their career with haste. Pharrell appears on the cover of Elle UK wearing a Native American headdress, which some in that community have called insensitive being that the headwear is considered to be sacred garb reserved for chiefs and warriors. Some even began using the hashtag #NotHappy on Twitter to express their ire over his cultural appropriation with messages that stated, “headdresses are not costumes.”

“We persuaded ELLE Style Award winner Pharrell to trade his Vivienne Westwood mountie hat for a native American feather headdress in his best ever shoot.”

The promotional copy has since been taken down.

“I respect and honor every kind of race, background and culture,” Pharrell wrote. “I am genuinely sorry.”

The magazine has yet to comment on the controversy. Currently, the post on the magazines site about the cover has received 88 comments.